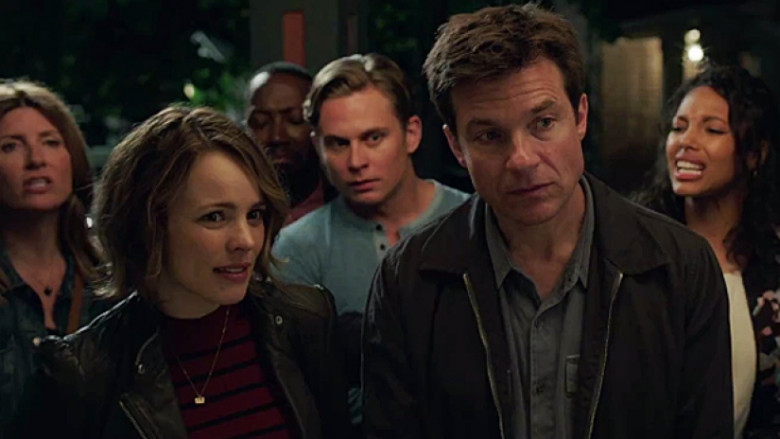 The dark humor and action twists of “Game Night” are reminiscent of a throwback to retro 80s movies like “Something Wild” and “Romancing the Stone,” films that combined comedy, mystery, action, and romance but with a slightly more ominous tone. This kidnapping caper is riddled with multiple illogical plot twists and sometimes inconsistent humor, but it’s such an interesting and different movie overall that it’s more of a winner than a loser.

Max (Jason Bateman) and Annie (Rachel McAdams) are a happily married couple who host a weekly game night at their home. When Max’s successful jerk of a brother Brooks (Kyle Chandler) organizes a mystery game night of his own, things quickly get out of hand. Someone in the room is kidnapped and the six competitive gamers will have to solve the case before the end of the evening. When the kidnapping turns out to be real (and Brooks turns out to be a drug runner and illegal goods smuggler), the evening becomes a do-or-die series of twists and unexpected turns.

It’s a provocative and slick premise that unfortunately never quite reaches the heights that it should. The tone is so uneven that at times the film feels like a screwball parody and later a heartfelt emotional drama. It’s very funny and although it’s a big budget studio film, it feels more like an indie suspense thriller. The characters are well-written and witty, with some razor-sharp, stinging dialogue. The natural onscreen chemistry of the actors is what elevates the film.

The cast has great comedic timing, and even Bateman’s usually irritating deadpan delivery works here. McAdams and Bateman play off each other with such ease that it feels like they’ve been besties for decades. Their offhand, casual rapport is the heartbeat of the entire movie, and their comedic talents are perfectly matched with the material.

I don’t think I’ve enjoyed Bateman this much in anything he’s ever done except for the first season of “Arrested Development” back in 2003. McAdams, one of the most underrated actresses working today, has a great comedic presence too. She plays Annie with an endearing blend of goofiness, intelligence and competitiveness, someone you’d love to be friends with in real life.

Jesse Plemons steals the entire movie though, as a creepy and peculiar recently divorced neighbor who is obsessed with being invited to game night. His role relies on a great deal of physicality — never have I laughed so heartily at the sign of a man in a police uniform stroking a white dog while steadily holding an unblinking stare. Plemons is funny just to look at, and anyone who’s ever had a neighbor will undoubtedly find him funny.

As with all comedy films there are hits and misses, but many of the jokes here you won’t see coming from a mile away. It’s refreshing even if it’s not all funny. The film starts off on the highest of the high notes, with a lively opening montage of how Max and Annie first met and fell in love, a game-heavy retelling of their love story. It lags a bit in the middle with some unfunny attempts at one-liners from the dummy of the group, Ryan (Billy Magnussen). But for every thud there’s a riot, like a very funny scene when Annie assumes she’s solved the crime and yells lines from “Pulp Fiction” in a dive bar and waves around a loaded gun like it’s a toy. What provides the most fun in the film are the parts where the characters still don’t know it’s all real. Eventually they figure it out, but get ready for even more crazy plot twists.

Sometimes the script feels like it’s relying a bit too heavily on pop culture references, dropping verbal and visual homages to films like “Taken” and “Django Unchained.” I can’t really criticize this point because it’s something that not only feels relevant to the script, but it will remind any movie lover of their day to day existence. Most of us who write about or are mega fans of films are fluent in movies, and this group of gamers would no doubt be the same.

“Game Night” is so different and so surprising that it’s worth seeing. I guarantee it will shatter whatever expectations you may have, as its overall atmosphere (and script) are just plain bizarre. As Max yells at some point during the film, “pick a tone!” I sort of wanted to shout that at the screen myself.