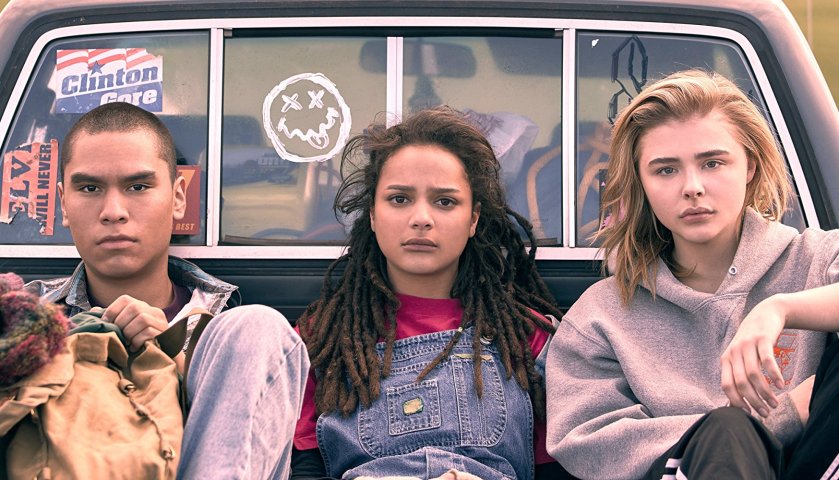 Growing up is hard enough but growing up gay in the early 1990s was agonizingly difficult, a sad truth that’s explored with the utmost sincerity in the lovely, touching, and heartbreaking “The Miseducation of Cameron Post.” Adapted from the novel by Emily M. Danforth, the film tells the story of high school junior Cameron (Chloë Grace Moretz) who, after being caught in the backseat of a car at the Homecoming dance with her best friend Coley (Quinn Shephard), is sent off to a private evangelical boarding school devoted to “curing” her lesbian tendencies and same sex attraction. Cam is being taught to “pray the gay away” in hopes that she can live a “normal” life and one day “have a family of her own.”

Many of the other teens at the God’s Promise compound are also torn and confused, filled with a self loathing that’s projected onto them by society and the adults in charge. There’s Cam’s perky and perpetually ashamed roommate Erin (Emily Skeggs), the emotionally ruined Mark (Owen Campbell, in a tragically heartbreaking performance), and her two almost instant best friends, the politician’s son Adam (Forrest Goodluck) and Jane Fonda (Sasha Lane) (who hides homegrown weed in her prosthetic leg). Each of these characters is fully fleshed out and feels incredibly authentic, right down to every little spoken word and action.

The Nurse Ratched character in charge is Dr. Lydia Marsh (Jennifer Ehle), a woman who started the camp to reprogram her homosexual brother Rick (John Gallagher Jr.). The duo lead their charges in various exercises of psycho-babble and Christian dogma and strive to pin all instances of same sex attraction on anything and everything from poor parenting, childhood trauma, jealousy, and playing sports. The leaders are never outright cruel and they aren’t even painted in too villainous of a light, they are just trying to do what they think is right through their own brand of brainwashing.

Although the film delivers quite the gut punch from programming teens to hate themselves, it’s also wryly funny and dare I say at times it’s even charming. It’s impossible not to become emotionally attached to these characters and share their struggle as they are forced to live in shame. Those of us who lived through the early 90s remember how it was a different time, especially for queer kids (I was a high schooler in the South at the time and none of my now-out classmates were able to be openly gay, hiding their same sex attraction for decades). Thankfully attitudes have eased up as the years have passed, but this story will likely resonate with those still living in the more backward parts of the country (and in places where conversion therapy is still legal).

The film is slightly reminiscent of “Lady Bird” in its sincere understanding of a young woman struggling to find her footing in the world (and in this case, coming to terms with her sexuality). But instead of a mother and daughter tug of war, Cameron wrestles with societal attitudes that are at odds with every ounce of her being. There’s a wealth of love, pain, loss, and desire, and this genuine story should speak to all ages and orientations, and not just the LGBTQ community.

The performances are stirring and pure (with a career best turn from Moretz); the ending is both sad and uplifting. It’s an impressive feat to find just the right balance in the material, and Desiree Akhavan directs the film with such compassion and care that everything becomes poignant in all the right ways.

The natural, unforced sincerity is the heartbeat of this film, and it touched me on the deepest emotional level. This is a moving coming of age gem that should resonate with those struggling to accept the truth of who they are and perhaps even give them the courage to stand tall and claim their own place in the world.