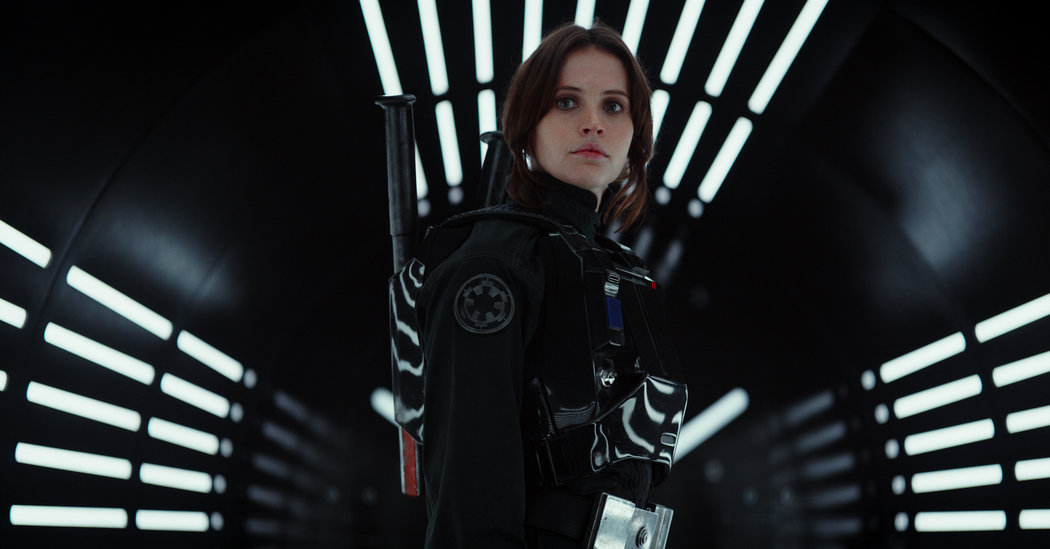 I sense a great disturbance in the force.

“Rogue One: A Star Wars Story,” the first of the new Disney owned “Star Wars” back story assembly line films, is as underwhelming as it gets. I wanted to like this movie. I really, truly did. As a standalone film, it’s just plain boring. As a Star Wars film, it’s nearly unrecognizable.

I knew something was going to go horribly wrong from the film’s opening 30 seconds, which manages to deliver an instant letdown to longtime fans. A sluggish and unnecessary prologue kicks off this chapter like a drab version of a dramatic made-for-television movie. The movie starts off on the wrong foot and quickly careens off a cliff and into a whirlwind of mediocrity, swiftly reaching the point of no return. It looks and feels cheaply watered down, from the murky brown cinematography and the inferior CGI of actors’ faces to the abysmal, ill-fitting musical score by Michael Giacchino (the distracting, clashing music is by far the worst thing in this movie).

This poorly conceived money grab tells the story of a group of Rebels who band together and go rogue to steal the plans to the Death Star. The film’s timeline takes place before 1977’s Star Wars, so there are lots of mildly amusing Easter eggs for die-hard fans of the franchise. Adding in a few nods here and there will surely elicit a few knowing giggles from geeks everywhere, but these little references are a poor mask for what’s simply a dull, lifeless movie.

There’s no spectacle, there’s no drama, and there’s no suspense. We all know how the story will eventually end, and this movie doesn’t make enough effort to ensure its fable is compelling or the least bit interesting.

It’s hard not to compare this one to J.J. Abrams’ far better “The Force Awakens,” especially in its casting. The diverse cast felt organic and natural in Abrams’ movie, whereas the diversity in “Rogue One” feels forced and phony to the point where it’s borderline laughable. I appreciate that science fiction films in particular lend themselves to diversity, but when it’s obvious to the audience that certain actors were hired mostly because of their ethnicity, it comes across as more offensive than inclusive.

The elephant in the room is the ghastly showcase of some of the year’s worst acting, from Forest Whitaker as Saw Gerrera (flashing his trademark stink eye while delivering hoarse-voiced dialogue without an ounce of emotional connection), the general unpleasantness emanating from Felicity Jones as Jyn Erso (competent enough as usual, but better suited as a soap opera actor than big budget movie star), the gross overacting (translation: a lot of angry yelling) from Ben Mendelsohn (Krennic), the dead-eyed Mads Mikkelsen phoning it in as Galen Erso, to a notably detached and wooden performance from the usually composed Diego Luna (as Cassian). While I appreciate the attempt from Alan Tudyk to add some much needed humor, his voicing of droid K-2SO just comes across as a pathetic and desperate C-3PO ripoff. The worst of the bunch is Donnie Yen as blind warrior Chirrut Îmwe — he rarely reaches the low, low bar set by incompetent high school thespians performing in the year-end senior play.

Poorly edited with bumbling animated effects and elementary in its writing, I’m sad to say that I wasn’t even entertained by “Rogue One.” I’d rather have been taking a nap during the majority of the movie, and it will be the only “Star Wars” film that I won’t see for a second time in the theater (yes, I even saw “The Phantom Menace” twice). What’s lacking is that epic feeling, a sense of distinction and importance: something that the Star Wars universe should do — and usually does do — so incredibly well.

Granted, the last fifteen minutes of this film are freaking fantastic, and I guarantee it will leave you with the most amazing movie high as you exit the theater. But nothing can forgive the boring, tedious and strained scenes leading up to the endgame.

“Rogue One” is worth a rental, but just barely. It’s the most disappointing movie of the year.

The first “Star Wars” expanded universe/spin-off movie is finally here, you guys! I was very much looking forward to “Rogue One: A Star Wars Story,” but I’m more than a little bit disappointed in the result.

In “Rogue One,” Jyn Erso (Felicity Jones) is the estranged daughter of Galen Erso (Mads Mikkelsen) the architect that built the Death Star. The Rebel Alliance, led by Mon Mothma (Genevieve O’Reilly) reaches out to Jyn and taps rebel pilot Cassian Andor (Diego Luna) to accompany her on a mission to connect with Jyn’s former guardian and protector, Saw Gerrera (Forest Whitaker). Saw knows how to find the plans to the super weapon, which the Alliance hopes may reveal a way to stop or destroy it before the Galactic Empire is able to use it to dominate the galaxy.

“Rogue One” adds some meat to the bones of the story we already knew from “A New Hope.” The problem with it is that there’s not that much meat – and what we are fed doesn’t taste very good. The first 90 minutes of the film are primarily devoted to introducing new characters and worlds in the Star Wars universe – some of whom we glimpsed through the trailers to the film. But none of these characters are that interesting, and (with the notable exception of the last one) the worlds aren’t that imaginative or special. After spending most of the film getting to know these people, it’s hard to react with anything other than a shrug. Sure, they look cool – but so what?

“Rogue One” doesn’t really come into its own until the last 30 minutes or so, when we get to see the beach planet battle that’s teased in the posters and trailers. The battle is mostly well-done, but the actors that are asked to carry the weight of the last quarter of the movie are clearly not up to the task. That is to say that the gravity and effectiveness of the battle is weighed down by the mediocre-to-terrible acting of Jones, Luna, and their compatriots. It’s fun to see some new and old Star Wars tech in action, sure, but it’s not as fun as it could have been if the movie had more emotional weight.

The film is at its best when it’s feeding us Member Berries. I won’t spoil any of them for you, but it’s fair to say that the Disney/Lucasfilm people harvested a whole crop of Member Berries for “Rogue One” and I will say that they taste… pretty good. For those of you who aren’t “South Park” fans (shame on you – you’re missing out), what I mean by this is that there are enough Easter eggs in this movie for “Star Wars” fans to make the world’s largest omelet. I won’t spoil any of them for you, but the problem with Member Berries like these is that while they are sweet and addictive, they are ultimately unsatisfying. Wasn’t the point of the spin off movies to try to tell new, different stories in the “Star Wars” universe? If so, “Rogue One” fails on that count.

If you’re a “Star Wars” fan, you’ll clearly want to see this movie. And you’ll love how those Member Berries taste. But “Rogue One” isn’t going to win over any new fans, and doesn’t make a convincing case for how this universe can be expanded to tell new and different stories.