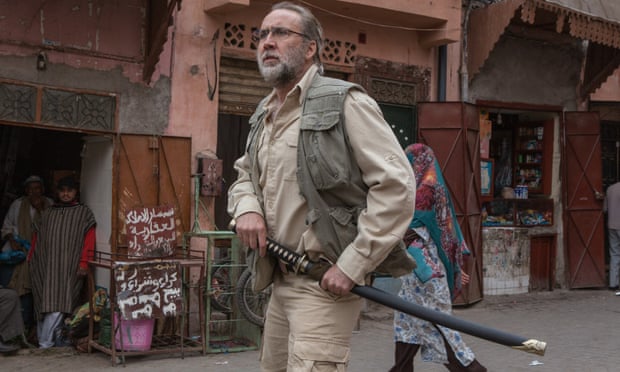 The preposterous true story of Gary Faulkner is brought to the big screen by “Borat” and “Brüno” director Larry Charles in “Army of One,” a loony, wacky and absurd comedy. In 2010, unemployed handyman Faulkner took it upon himself to travel to Pakistan in a rogue attempt to single-handedly capture Osama Bin Laden. The film is based on a GQ Magazine article and it’s so crazy that you’ll need to be reassured that yes, this is a real guy and yes, this really happened!

Time has made audiences forget how insanely funny Nicolas Cage can be, but he is in his kooky element playing Faulkner as a wildly crazed, erratic and eccentric madman with a penchant for nonsensical riffing. Cage has an affable, genuine comedic presence, and farcical banter comes effortless to him. He’s able to chew the scenery with this part, and he does it extremely well –in a way that no one but Cage could do. His brand of wild-eyed madness is amusing in itself, but he completely becomes this character. This movie is worth seeing solely for his performance.

Most of the laughs come early on when Gary is trying to figure out how to actually get himself to Pakistan. He first attempts to reach the country by sailboat from San Diego. His next attempt is to hang glide across the Iranian border. These pursuits obviously don’t end well, but they sure are incredibly funny. Eventually Gary makes it overseas armed only with his new off-the-rack samurai sword (purchased from the Home Shopping Network) and sets out to complete his patriotic mission.

The film starts to fall apart a bit when it reaches its halfway point. Once the main character reaches Pakistan the laughs subside, nothing really happens, and the CIA gets involved. It’s still an enjoyable enough film, but there’s a stark contrast between the film’s first 30 minutes and its last. I enjoyed seeing the frequently clueless Gary unwittingly inserting himself into situations that threaten grave danger, all in the name of patriotism — and I wanted more.

Russell Brand adds a bit of stunt casting as God (he periodically shows up to speak to Gary), but his scenes are sadly devoid of laughs. The idea is funny in itself and probably looked like a winner on paper, but for some reason it just doesn’t translate well to the screen. The script (penned by Rajiv Joseph and Scott Rothman) is engaging and packed with crazed dialogue, but I wanted to see more. Stick around for the end credits where you’ll get to see photos and video interviews with the real-life Gary Faulkner.

“Army of One” is best suited for a rental — I’m shocked it secured a theatrical release, especially with no marketing campaign behind it. Still, it’s one of those odd little movies (and another notch of weirdness in Cage’s belt) that you have to see to believe.

When it comes to roles where you have to question whether the character is just eccentric or actually crazy, Nicolas Cage is the undisputed master. In “Army of One”, Cage is clearly letting his freak flag fly, going all in in his portrayal of real-life weirdo Gary Faulkner.

Faulkner is a particularly strange man. In the late 2000s, Faulkner decided that the most patriotic thing he could do for his country would be to find and capture (but preferably not kill) Osama bin Laden. Deciding that bin Laden was in Pakistan, the 50-year-old Faulkner then went about the difficult work of trying to travel there as an American civilian. His first plan was to sail (!) there, even though he didn’t own a boat or even any nautical skill. When that failed, Faulkner tried hang-gliding into the country from a mountaintop in India. That didn’t work, either. But he did, eventually, get there – and proceeded to freak out both the locals and the local CIA Station Chief in his unfocused hunt for the terrorist.

Director Larry Charles (“Borat: Cultural Learnings of America for Make Benefit Glorious Nation of Kazakhstan”, “Bruno”) obviously has a great fondness for Faulkner and his well-intentioned mission. While the movie isn’t particularly well-made, as a comedy director, Charles is skilled enough at knowing when to let the script and Cage do the hard work. And it’s in those moments – when Cage is allowed to go all in on the crazy – that the film is at its best. You get the sense that Cage needed very little direction; probably Charles simply yelled “action” and let him do his thing.

“Army of One” is at its best when Faulkner is stateside in Colorado, talking to his girlfriend Marci (Wendi McLendon-Covey) and his friends Roy (Will Sasso) and Pickles (Paul Scheer). Oh, and let’s not forget about Faulkner’s very literal conversations with God (Russell Brand). It’s in those moments that we are able to appreciate both Faulkner’s sincerity and his charisma; even though he’s clearly off-balance, he’s so damned likeable that he’s able to get along pretty well. When the action moves to Pakistan, however, the film loses much of its momentum. Even an enjoyable-but-barely-recognizable Rainn Wilson (playing Agent Simons) can’t get it back.

It’s hard to recommend “Army of One” but it’s enjoyable enough if you’re in the mood for something offbeat.