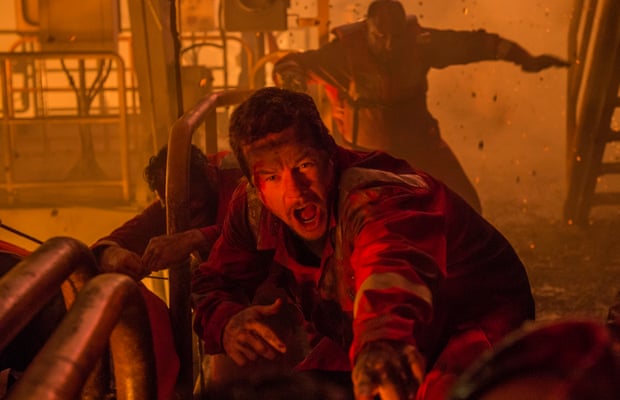 One of the world’s largest man-made disasters was the explosion of an offshore oil rig in the Gulf of Mexico in 2010. This true incident is dramatized in the loud and garden-variety “Deepwater Horizon,” a movie that seems determined to simply show us the ‘how’ of the tragedy instead of exploring the ‘why.’ Shouldn’t we all be outraged that something like this happened in the first place?

Mark Wahlberg plays our roughneck hero Mike, a man portrayed as a hunky savior who literally throws coworkers off a flaming rig. Wahlberg is believable in roles like this because he has an everyman quality that most can relate to. The casting is absolutely perfect and the supporting actors are all quite effective. There’s Kurt Russell as gruff senior supervisor Mr. Jimmy, Gina Rodriguez as rig operator Andrea, John Malkovich as a clueless BP well site leader (with an over-the-top and mildly amusing Cajun accent), and Kate Hudson (who, sadly, is given little to do as Mike’s worried wife Felicia).

The filmmakers try to give a bit of background on these characters and show us their personalities, but they all still come across as paper thin. Even when the movie ended and after sharing two hours with them, I didn’t feel much emotional connection. Not to sound heartless to those who suffered due to this tragedy, but these folks deserved more onscreen detail.

The film both explains too much yet doesn’t explain enough of the engineering background of how an oil rig works and why drilling is so dangerous. Early on, there are multiple attempts to clearly illustrate the engineering (even using props like a Coke can). Eventually that devolves into a poor man’s ‘let’s blame the Big Oil suits‘ mantra and does nothing but simplify the blame. It feels like director Peter Berg and screenwriters Matthew Michael Carnahan and Matthew Sand simply threw up their hands halfway through their science lesson.

The realistic action sequences aren’t very effective because it’s unclear what is happening in relation to the rig’s floorplan, and the special effects are nothing more than acceptable. The overuse of shaky cam, which quickly made me regret sitting on the third row in the theater, was obnoxious in every way imaginable. There are plenty of eye-rolling moments like the Michael Bay-esque shots of tattered American flags flying high while huge, fiery explosions set the backdrop (groan). Oh, and since these are just blue collar good ol’ boys, there’s also the annoying obligatory group prayer scene that is always front and center in movies like this (see “The Finest Hours“).

This movie had a huge $150 million plus budget, but it looks like a commonplace rip-off of other disaster movies like “The Towering Inferno.” I wanted to know more about the environmental impact of the incident, the implications of offshore drilling, the dangers of the lack of safety regulations, and the human costs of corporate greed. Unfortunately, the film misses many opportunities to address these topics, probably due to studio fears of “let’s not make this too smart.” It’s more of a straight up action movie, showing us dramatic explosions, furiously spewing oil geysers, gruesome broken bones, feet and heads bloodied with massive shards of glass, and plenty of gigantic fireballs.

“Deepwater Horizon” is an excellent example of how a film with a decent script and good actors can be completely ruined by terrible direction.

Director Peter Berg (“Battleship,” “The Kingdom”) apparently LOVES shaky cam (that affectation where the camera shakes incessantly throughout action-packed sequences to convey a sense of urgency and disorientation). Once the well backs up and explodes on the rig, the camera never stops moving violently back and forth. It’s as though the camera was placed on top of a giant spring, which is itself on rollers, mounted on top of a seesaw that is riding out an earthquake in the middle of a hurricane. Okay, maybe I’m exaggerating a little, but not very much. Berg’s direction is so frenetic that he makes Paul Greengrass (he of the “Bourne” travesties, who practically wrote the book on shaky-cam work) look like Martin Scorsese.

In the disaster film like this one, it’s important for the audience to understand to have a good sense of spatial relationships so that they can appreciate what is actually happening to the characters. In “The Poseidon Adventure”, for example, you are always able to tell where the actors are on the overturned cruise ship and where they must go next to escape to safety. In “San Andreas”, I knew where the giant fault lines and waves were, and could tell where Dwayne Johnson needed to go to get his family to safety. This sense of space is completely lost in “Deepwater Horizon” once disaster strikes; once the action starts it becomes almost impossible to tell what is happening where.

To illustrate this point: there is one scene that occurs about 10 or 15 minutes after the well backs up that there is apparently a crane somewhere that is threatening to topple over. When it does, it could kill a number of crew members directly in its path. We know this not because we can see it on the screen; we know this because the dialogue tells us that’s what’s happening. Some guy has to go and try to prevent the crane from falling, and when he does so, you have no idea where it is he’s going and what it is he’s doing to try to stop the crash. This sort of thing happens over and over, to where it becomes completely frustrating to even try to watch.

To me that’s the greatest measure of what constitutes terrible direction: if it becomes so difficult for the audience to follow the action that they give up even trying to do so, you have utterly failed as a director.

What is so surprising and disappointing about this disaster of a disaster film is that the story is pretty darned good. Things moved along quickly, and the cast (Mark Wahlberg, Kate Hudson, Kurt Russell, and John Malkovich among others) did good work creating sympathetic characters that put a human face on the tragedy. In the hands of a more capable director, this movie could have been good.

If there’s any justice in the world, “Deepwater Horizon” should sound the death knell of shaky cam and convince Hollywood filmmakers once and for all that the technique should be used (if at all) only sparingly. It’s not exciting. It’s not compelling. And it’s not good craft.