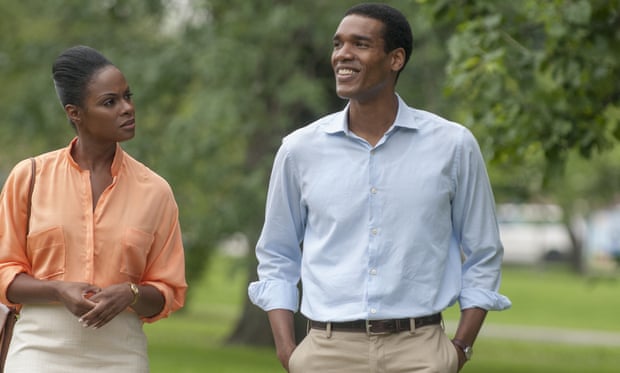 Inspired by Barack and Michelle Obama’s first date in 1989, “Southside With You” is a fun period premise that just isn’t fully realized. It’s not romantic enough to be a traditional date movie and it tries too hard to be a racially focused drama, making this talky film from writer-director Richard Tanne much more of a bore than a joy to sit through.

The movie focuses on one date and takes place over one day in and around Chicago. Summer law firm associate Barack (Parker Sawyers) picks up his colleague Michelle (Tika Sumpter) to spend the day chatting and exploring their city. In a blatant rip-off of the far better “Before Sunrise” series, this film starts off delightful and then becomes just too cutesy and preachy to be meaningful.

The film makes Obama out to be some sort of savior for the poor and the disenfranchised which I guess is okay, but it’s also more than a little irritating. (The religious imagery becomes so forced that there’s a scene in a church where Obama is bathed in sunlight).

The early banter in the ‘first date’ scenes are fun, romantic and enjoyably charming, much due to the charismatic performances from Sawyers and Sumpter. It’s when the discussions turn more and more towards race and poverty that the film begins to feel like it’s an exercise in pandering to the liberal crowd. Ultimately it becomes a bland attempt at pointed social, gender and racial commentary.

This movie is short (84 minutes) but it should’ve been even shorter. There’s just not enough compelling material to make an interesting feature film.

On a sunny summer day a young Barack Obama (Parker Sawyers) picks up a young woman, Michelle Robinson (Tika Sumpter), from her home in Chicago’s south side. Michelle is a junior associate at the Chicago firm Sidley Austin, and Barack is working there as a summer associate. As the two spend the day together, they get to know more about one another and what makes the other tick.

Spending a day with the future President and First Lady is a refreshingly unique way to get to know more about two people who have subsequently become larger-than-life. The novelty of the approach, however, isn’t enough to make “Southside with You” interesting as a movie in its own right.

That’s not to say the movie doesn’t have its moments. One standout scene has the future President Obama relating a particular artist and his painting style to JJ on the TV show “Good Times”; another has the future first couple debating the relative merits of pie versus ice cream as a favorite dessert. Other times, however, the film seems to be a little too reverent towards its subjects, which detracts from the story and makes it less compelling as a piece of entertainment.

There are some interesting insights here, and some subtle and not-so-subtle commentary on race, gender politics, and the glass ceiling. These issues, of course, continue to be as relevant now as they were in the late 80s. But as important and worthy of discussion as these issues are, the film doesn’t work very well as a piece of entertainment. It’s interesting that Spike Lee’s seminal work “Do the Right Thing” is so heavily referenced in “Southside with You”, because Lee’s movie is an excellent example of how politics, race, and social justice can be woven into a tale that is also entertaining in its own right.