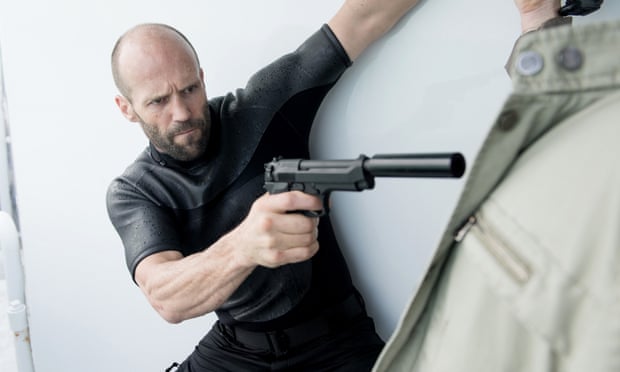 I am one of Jason Statham‘s squealing fangirls, but even I wasn’t clamoring for a sequel to 2011’s “The Mechanic.” Apparently Hollywood assumed that society was starved out for another, so now we have “Mechanic: Resurrection,” a movie that could’ve been a lot of fun had more thought been put into the story.

Statham returns as killer fix-it man Arthur Bishop, and this time his life is in danger unless he assassinates a list of baddies (including an eccentric arms dealer played by Tommy Lee Jones) for an even bigger baddie (Sam Hazeldine). It’s an elementary, easy to follow plot, but the film actually gets bogged down with too much plot during its first 30 minutes. There’s a silly romantic subplot with Jessica Alba (miscast as the love interest), and most of the early scenes just peter out with mass insignificance. Thankfully, once what we all came to see (translation: the bloody, nonstop action) begins, the film takes off and doesn’t slow down. Too bad it starts far too late in the game.

The action sequences are over the top silly but are also, for the most part, still fun. Some of the better choreographed action bits involve a prison break, a glass-bottomed swimming pool, and a mass shootout on a yacht. There’s a bit too much shaky cam for my tastes, but it’s a surprise that most of the nausea-inducing filmmaking style isn’t used during the fight scenes. The filmmakers obviously made this movie as a cool excuse to travel the world and visit a bunch of gorgeous exotic locales (from Australia to Thailand to Cambodia and more).

“Mechanic: Resurrection” isn’t the type of movie that demands your full attention (it’s best suited as a rental): you could fold laundry, talk on the phone, even take a short nap and still not miss one important piece of the story.

And if you’re looking for a movie where the hunky Statham repeatedly removes his shirt and kicks ass, then you’ve come to the right place.

“Mechanic: Resurrection” is a middling follow-up to 2011’s “The Mechanic“, which itself was a decent but entirely unremarkable movie that is easily confused with many of the other pictures in Jason Statham’s ouevre. Not that there’s anything wrong with that, mind you — I am a big fan of his — but I would be hard-pressed to tell you what “The Mechanic” was about and how it was different from “Safe,” or “Parker,” or “Redemption,” or any of the other Statham vehicles that have been released over the last five or so years.

I say unremarkable, but that’s not entirely fair. There are a couple of inventive action sequences that involve Statham’s retired assassin-with-a-conscience, Arthur Bishop, killing some really bad guys in ways that I’ve never seen before. The highlight was clearly the sequence involving a cantilevered pool hanging over the edge of a high rise building, which they completely spoiled in the film’s trailer. Another scene featuring Bishop attacking his nemesis on a mega-yacht was mostly rote, except for Bishop’s methods for getting onto the moving ship.

Production values were good enough to get by. Statham was fun to watch as always. Jessica Alba was borderline unbelievable as Gina, Statham’s love interest. As a hard-to-kill arms dealer, Tommy Lee Jones did a decent job as an arms dealer who (remarkably for Jones) didn’t spend most of his time yelling every single one of his lines. Production-wise, director Dennis Gansel and cinematographer Daniel Gottschalk managed not to screw things up too badly and, for the most part, didn’t do too much quick-cutting and shaky cam work during the action sequences so I could actually tell what was happening most of the time.

When it comes to straight action films, moviegoers haven’t had much to choose from this summer. Given the slim pickings, it’s hard to be overly critical of this movie. When compared against the abysmal “Jason Bourne,” “Mechanic: Resurrection” looks like “The Godfather”. But then again, almost anything would look like a masterpiece compared to “Jason Bourne.”