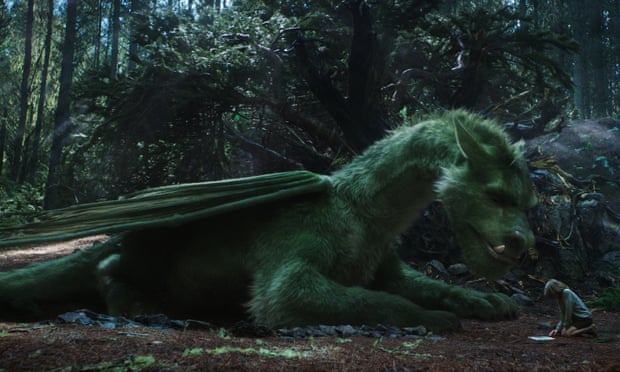 The classic story of an orphaned boy and his best friend, a dragon named Elliot, is reimagined in “Pete’s Dragon,” a surprisingly dull and drab adventure movie from “Ain’t Them Bodies Saints” director David Lowery. This boring “E.T” ripoff never really gets off the ground and very little happens during its short 103 minute runtime. What should’ve been a compelling story about the relationship between a boy and his dragon is sorely underdeveloped and the premise entirely wasted.

The biggest problem with “Pete’s Dragon” is that it’s far too much like Disney’s live action remake of “The Jungle Book.” There’s an annoying kid who is raised in the woods by a kindly animal. Instead of sweeping shots of the jungle we get sweeping shots of the Pacific Northwest (that a dragon and child could live in the woods and never be discovered by anyone for over 6 years is so unbelievable it’s ridiculous). There’s a thinly veiled environmental subplot about forest conservation and a distasteful, not-so-subtle suggestion that traditional families are what’s best for wayward kids.

The horrific opening sequence sets an ominous tone that’s really quite dark and is sure to frighten some kids. The scary then suddenly jolts to happy, ending just as quickly as it begins. These massive tonal shifts continue to plague the film and make for a confusing ride. Elliot is green and fuzzy and cute and adorable for the majority of the story, acting like a silly and friendly puppy, but then there’s a disturbingly intense scene of him breathing fire and trying to kill the townspeople. It’s an exercise in the unpleasant.

The actors don’t help things either. Bryce Dallas Howard is Grace, a friendly forest ranger who takes the child under her wing. Why Howard is a star is beyond me, she is one of the most annoying and least talented actors in recent history. I’m not trying to specifically pick on her because there are plenty of ho-hum performances from the rest of the cast. Little Pete himself (Oakes Fegley) is annoyingly precocious, Karl Urban‘s character Gavin plays like a goofy evil hunter type, and the great Robert Redford (Meacham) is given little to do as a kindly elderly storyteller who rambles on and on about the “magic” in the woods.

Speaking of magic, that’s precisely what this film lacks. There’s simply nothing magical about it.

As a child of the 70s and 80s, I remember the 1977 “Pete’s Dragon” movie fondly. Mind you, I can’t tell you anything other than that it had a boy named Pete and that he had a dragon friend named Elliot, but I remember loving it. I especially remember my “Pete’s Dragon” lunchbox (damn I loved that lunchbox) and the matching Thermos inside.

Nostalgia is a powerful thing. Coasting on this nostalgia I enthusiastically saw “The Jungle Book” earlier this year and that same sense of historical connection drove me to see this remake, too. And (unlike that movie) I liked “Pete’s Dragon” because it felt authentic without being forced.

This version of “Pete’s Dragon,” like the original, takes place during some time in the late 70s / early 80s, a time that the world was bigger and there was more of a sense of community tied to the place where you lived. Pete is an orphaned boy who has lived in the woods for the last six years with his friend Elliot, who is a dragon. Pete and Elliot’s world gets smaller when a local company encroaches on their space by clear-cutting the forest around them. The locals learn about Elliot and seek to capture him, threatening to split the pair and civilize Pete.

The story of “Pete’s Dragon” is a fundamentally simple one about a boy and his best friend. The film is at its best when it’s reminding us of the strong bond between humans and animals and the importance of that relationship. Although Elliot is a computer-generated character, he feels lifelike because he acts like an animal that is of our world; his mannerisms and actions have an authentic quality that bring a realism that gives the story weight and infuse it with a sense of wonder that affects both the characters and the narrative. Director David Lowery (“Ain’t Them Bodies Saints”) takes Elliot seriously, and the film asks us to do the same.

It is this earnest treatment of the fantastic that makes the movie interesting, and it’s the clash of the fanciful dragon with the real world that both creates the drama and drives the picture. “Pete’s Dragon” is a good family film because it teaches respect for animals and the environment at the same time that it entertains. While far from perfect, it’s good enough to recommend.