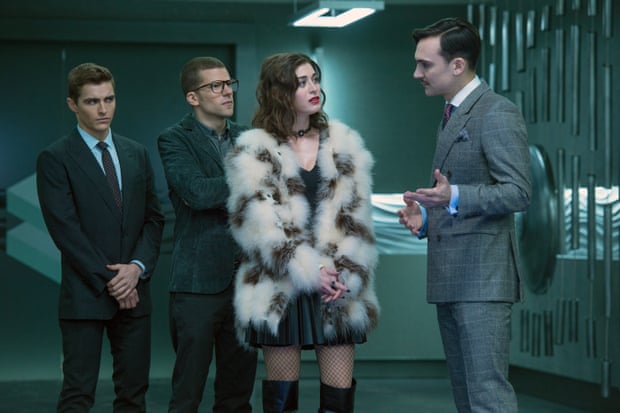 Most moviegoers weren’t clamoring for a follow-up to 2013’s smart magic heist thriller “Now You See Me,” but here’s one of the rare instances where the sequel is actually better than the original. While viewing the first film would be helpful before seeing “Now You See Me 2,” it’s not necessary. Even newbies can follow along with this slick magic show.

The Four Horsemen are back, this time fighting the powers that be with even greater illusions. Atlas (Jesse Eisenberg), Merritt (Woody Harrelson) and Jack (Dave Franco) are now joined by Lula (Lizzy Caplan, a welcome replacement for Isla Fisher as the “girl Horseman”). Mabry (Daniel Radcliffe) plays a tech nerd who forces the Horsemen to steal a chip so he can control all of the computers in the entire world — but who is really pulling the curtain? Mark Ruffalo is back as FBI agent and magician Rhodes. Here he still aids the Horsemen (and seeks to find some closure with Thaddeus (Morgan Freeman), a man Rhodes blames for the death of his father). Yes, there’s a lot going on in this convoluted plot, but it is exciting from beginning to end.

One of the most enjoyable aspects of the movie is the elevated performances. I love the trend of casting accomplished actors in fun summer movies; I think audiences get a better movie for it. These are talented actors who visibly enjoyed working together; they play off each other with an effortless believability. Their repartee is lively and their visible enthusiasm for their roles (and the film) is contagious and as a result, I was smiling throughout the whole movie. Harrelson will probably be taking some jabs for his partially silly turn (I don’t want to say how because I don’t want to spoil it), but I thought he was ridiculously amusing. No matter how you feel about the film, you have to agree that these characters are a hoot to spend a few hours with.

As with the first film, this one is packed full of entertaining twists and fun “gotchas!” A lot of it is, of course, ridiculous, but interspersed throughout the flashy trickery are some truly funny and memorable moments. Most of the stunts are CGI animation but even though they are fake, they’re still pretty damn cool. The big finale may be predictable but that makes it no less fun. I love the all of the misdirection this film includes (it’s the perfect homage to real magicians and tricksters), and it’s done in a witty and skilled fashion. Is this film as clever as it thinks it is? No. But so what? It’s a fun, wild ride.

“Now You See Me,” which told the story of a group of sensational illusionists that call themselves “The Four Horsemen,” was a sleeper hit in the summer of 2013. What worked so well about the first movie was that it used the illusion / magic angle to tell a twisty heist drama that kept the audience guessing. Attentive theatergoers who like to figure out whodunit found themselves challenged not only by the mystery of who, what, and why, but also the how. How, as in, how did they do that?

I’m pleased to report that the movie’s sequel, “Now You See Me 2” works just as well as the first film. As in, if you enjoyed the first movie, you will probably like this one, too.

“NYSM2” is effective because it doesn’t try to simply rehash the first film. As it opens, the Horsemen — Daniel, Merritt, and Jack (played by Jesse Eisenberg, Woody Harrelson, and Dave Franco) have separated and Henley (Isla Fisher) is nowhere to be found. Their principal benefactor brings them back together to respond to a growing threat, and brings along new Horseman Lula (Lizzy Caplan) to help as their fourth. The tables are quickly turned on the Horsemen, and they find themselves challenged by a new threat. This cast has great chemistry; they are all likeable, they work well together and they are a ton of fun to watch. Caplan is a great addition, adding an outsider’s viewpoint to the group combined with a healthy dose of humor.

The illusions are not necessarily bigger or better, but they are different from the ones we saw last time. They are just as spectacular and fun to watch, and it’s just as enjoyable to try to figure out how you (and the other characters) are being misdirected. The movie keeps you guessing, which I absolutely love.

“NYSM2”, like its predecessor, rewards the attentive. Don’t bother trying to watch this film while multitasking with something else. You won’t be able to follow it and consequently, you might not like it as much as I did. But if you’re willing to put away all of your devices and distractions and get lost in a movie for a couple of hours, this one would be an excellent choice.