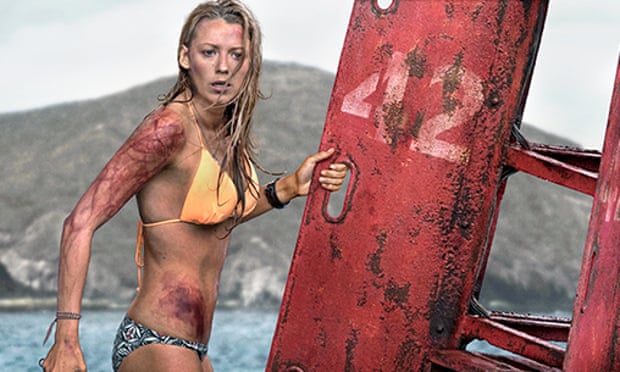 Killer sharks are just plain fun to watch onscreen (“Jaws,” “Deep Blue Sea,” “Sharknado“), and thankfully “The Shallows” carries on the great tradition of satisfying summer shark movies. This isn’t groundbreaking cinema by any means, but it offers up an amusing, intense and suspenseful ride. When medical student Nancy (Blake Lively) surfs a secluded Mexican beach solo, she unknowingly wanders into the feeding grounds of a gigantic great white shark. Injured and alone, she finds herself stranded from shore while the shark circles and waits to make her dinner.

This is a simple feminist survival story of girl vs. shark with a great deal of precision in its swift storytelling (a quick 87 minute run time) and a compelling performance from the talented and likable Lively (who is only briefly upstaged by her onscreen acting partner Steve the seagull). There’s not much fluff here, it’s a tight story that’s well acted and filled with some truly spectacular underwater photography by cinematographer Flavio Martinez Labiano.

“The Shallows” proves that less is more: audiences don’t need an overuse of CGI animation or frantically edited action sequences or huge production budgets to get a genuine thrill. The film is packed with multiple what would I do in this situation? moments. I found myself wondering internally how I’d handle the same predicament, and I love when survival movies make me think like that (“All Is Lost,” “Green Room,” “127 Hours“).

As with many killer shark movies, this one has a silly-ish ending but that’s okay. When you stop to think about it you’ll quickly realize the entire premise of the film is silly (sharks don’t act like this in the wild), but that’s where a suspension of disbelief kicks in. The premise is ridiculous yet the film is far from dumb.

You shouldn’t take “The Shallows” too seriously but even if you did, it’s an incredibly well made piece of entertainment. Overall the movie is entertaining, riveting, and provides the perfect summer escape.

A surfer girl travels to a remote beach in Mexico to catch some amazing waves. While the waves don’t disappoint, her fun is quickly spoiled by an encounter with a great white shark that has come to the shallows for dinner, and she’s on the menu.

A (wo)man against nature movie in the tradition movies like “Open Water” and “Frozen” (this one, not this one), “The Shallows” is an entertaining film on a topic on which most of us seem to never grow tired: killer sharks. Even though the idea is nothing new, these sorts of stories are always compelling when they’re done well. And because it’s been several years since the last movie of this type has garnered any notice, audiences are apparently embracing it as something different from other summer fare.

While the story itself is not particularly special or unique, the photography and sound design elevate it. The movie is beautifully shot by cinematographer Flavio Martinez Labiano (“Unknown“, “Timecrimes“), who presents a tactile environment that is rich in texture and hue. The sand on the beach, the blue of the water, the sharpness of the coral have all been captured in exquisite detail. This film looks and sounds amazing, and you can easily picture yourself on this beach, in the water, or facing the elements in this world.

It’s not perfect, but there is just the right amount of sense, sensation, tension and suspense here to make for an engaging summer escape. Plus, at a relatively brief running time, the movie doesn’t try your patience. It’s worth watching.