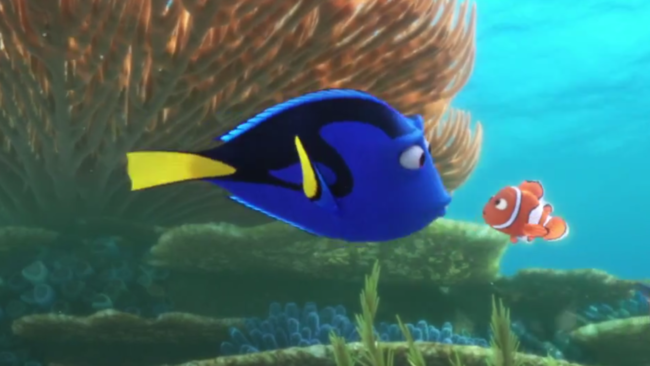 The main question on my mind after the final credits rolled for “Finding Dory” was ‘does Pixar even care anymore?’ It seems like the answer is a resounding ‘no.’ The studio continues its streak of mediocrity in their latest not-so-great animated feature, a sad rehash of 2003’s far better “Finding Nemo.”

This time it’s the lovable blue Dory (Ellen Degeneres) who is searching for her long lost family. Dory suffers from short term memory loss, a cute gimmick until the parameters of her condition change on a whim: she can’t remember what she was talking about five seconds earlier yet conveniently remembers important details from years ago when it’s vital to the plot. Both Marlin (the always fantastic Albert Brooks) and Nemo (now cutesy-voiced by Hayden Rolence) are back as Dory’s sidekicks, and there are multiple unnecessary, obligatory cameos from Crush (Andrew Stanton) and Mr. Ray (Bob Peterson).

As with many animated films lately, the voice talent is borderline horrible. These actors originated the roles and created the sound of the characters, but there is something not quite right about their performances here, especially from Degeneres. She managed to make Dory devoid of any empathy or likeability, both characteristics that oozed from her performance in the original “Finding Nemo.” Ditto for the absolutely dreadful vocal performances from Ed O’Neill as Hank the octopus and Ty Burrell as Bailey the beluga whale. I’m cringing as I’m writing this when I think of how simply lousy they were.

Speaking of Bailey the beluga whale, that entire character was pretty awful. Beluga whales are undeniably awesome but the idea that one was using his sonar capabilities to track fish in pipes or a truck on a major highway (being driven by an octopus) was so ridiculously stupid that it nearly single-handedly ruined the entire movie for me. Parents, use this film as an educational opportunity to teach your kids about marine life so that they don’t grow into moronic adults.

The film is also plagued by ugly, uninviting animation. The lovely short preceding the film, “Piper,” is rich and gorgeous and lush and full of vibrancy. With “Dory,” all we get is murky, dreary animation with an astonishing lack of detail. Really, why did this movie have to look so brown and gray and washed out? I don’t understand how anyone would enjoy the look and feel of this movie.

I adore animated films, I truly do. In fact, animation is of my favorite genres ever. I hate having to consistently dish out low star ratings to the Disney / Pixar mouse powerhouse but their winning formula obviously has grown old and stale. I had high hopes for this movie, but a stinker is a stinker and there’s no getting around that.

While it’s not a timeless classic on the level of “Finding Nemo,” “Finding Dory” is an enjoyable enough piece of entertainment that’s worth watching.

Dory (voiced by Ellen DeGeneres), she of the short-term memory loss, has come to the realization that early in life, she lost her parents. As she continues to remember bits and pieces of what happened to her when she was a young fish, she goes in search of her family, aided by Nemo (Hayden Rolence) and Marlin (Albert Brooks). Her adventures take her to the place where she was born, where she meets friends both new, like Hank (Ed O’Neill) and old, like Destiny (Kaitlin Olson).

Like most of the more watchable Disney/Pixar movies, “Finding Dory” doesn’t fall into the modern-day trap of animated movies by trying too hard to please the parents by including far too many “adult” jokes while also trying to amuse kids by using too much modern vernacular. The animation is good, as one expects from a Pixar film. The voice talent is strong, where the voices mostly match the characters and doesn’t rely overly much on stunt casting (using popular A-list actors) to round out the cast.

The story is also pretty good. While some of the plot points started to verge on the ridiculous — with animals doing things that were decidedly NOT authentic to the species — I didn’t get bored, and I didn’t get annoyed. For an animated film, this is high praise from me. I cared about Dory, Hank, Marlin, Nemo, and the others, and I felt invested in their story. This also seemed to be true for the rest of the audience that was in my screening: while some younger kids got a bit restless, most of them were well-behaved enough and seemed invested enough to care about what was happening.

If you’re expecting a Pixar masterpiece like “Wall-E” or “Toy Story 2,” you’ll be disappointed in “Finding Dory.” But, on the other hand, if you are hoping for a movie that you can enjoy along with your well-behaved children that liked “Finding Nemo,” I think you’ll be pleased.