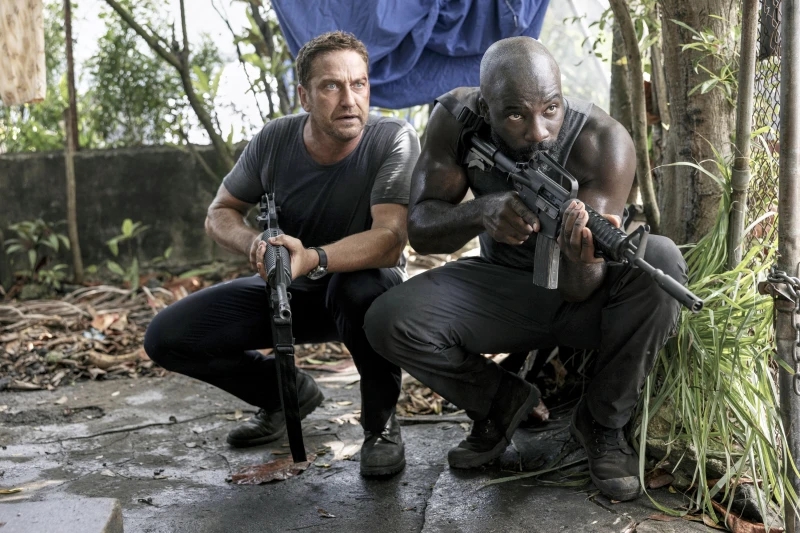 With so many action films coming up short, it’s always a pleasure when a B-movie like “Plane” sticks the landing (pun intended). The premise is far-fetched, but director Jean-François Richet‘s choice to pepper the story with a gritty realism instead of a glossy spectacle makes it work.

Experienced pilot Brodie Torrance (Gerard Butler) is behind the controls when his plane is hit by a terrifying lightning strike, frying all of the communications and electrical systems. He and his crew are forced to make an emergency landing, ending up on a war-torn island that’s run by a dangerous militia. There’s no government or police here, and the passengers are soon taken hostage. Without anyone knowing where the plane went down, Brodie enlists the help of a passenger named Gaspare (Mike Colter), an accused murdered who was being transported on the flight by the FBI. With danger right at their doorstep, the two men must fight for everyone’s survival.

It’s a vehicle that would be suited just as well for Liam Neeson, but the film feels tailored to what Butler does best. He has become his own brand of everyman, a dependable, hardworking actor that can fit into any role. As a pilot, Butler is believable and likeable, with a good mix of calm professionalism and masculine whoop-ass.

The stakes are high in the story, with passengers and crew facing a deadly threat. They’re in real danger, and you can feel it, especially when everyone ends up being hunted by local mercenaries with an arsenal of firepower.

What makes the story feel so real is that nothing about the film screams huge-budget blockbuster. The crash landing is exciting but not over-the-top, and the action is neither polished nor spectacular. The hand-to-hand fist fights aren’t slickly choreographed, and most of the action comes from bloody gun violence. The simplicity of it all makes the predicament of the characters feel authentic, and next to Butler, it’s the film’s greatest strength.

I had a great time watching “Plane,” even if it is the type of movie that I probably won’t remember seeing by the time 2024 rolls around. It may be forgettable, but it sure is entertaining.