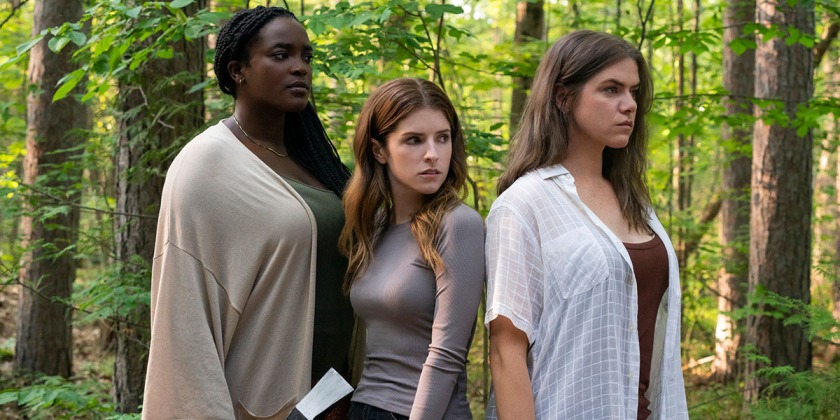 Having experienced a close friend stuck in an emotionally abusive relationship,” Alice, Darling” really hit home. It’s a story (by screenwriter Alanna Francis) that captures the realism of what it’s like as an observer, and what I can only imagine it feels like to be the person suffering in silence. This isn’t a movie that is pleasant to watch, but that’s not why it falters. The themes are absolutely important, but director Mary Nighy chooses a path that feels like an Afterschool Special with its overt messaging. This is what ultimately hurts the film.

Alice (Anna Kendrick) has found her dream man in Simon (Charlie Carrick). He’s handsome, successful, charming, and seems like a good boyfriend. When she agrees to reconnect with her two best friends Sophie (Wunmi Mosaku) and Tess (Kaniehtiio Horn) at a getaway to a quiet lake cottage, they begin to sense something isn’t right. The man is always checking up on her, texting all the time, and making their friend anxious and distant. After Alice spills that she had to lie to Simon and tell him that she’s on a business trip instead of a mini vacation, Tess and Sophie pry deeper. The truth comes to light as they learn that their best friend is trapped in an emotionally and psychologically abusive partnership.

Intimate stories like this expose important issues that are overwhelmingly specific to women. Too many of us know friends or family members who have been through a similar situation, and it speaks volumes that a good number of viewers will relate to this film on a more personal level. It’s easy to judge when it’s not happening to you, and the film is a wake-up call not only for those experiencing abuse to reach out, but for those around them to be alert and learn to spot the red flags that are so easy to miss.

When Nighy chooses to focus on the female friendships and characters, the film is at its best. Kendrick, Mosaku, and Horn have a natural rapport, which makes their performances feel real. Kendrick is especially heartbreaking, and her turn as an anxiety-ridden woman who feels trapped shows an impressive dramatic range. The actors do their best with this story of friendship and abuse, but the material makes for a tough transition from page to screen.

The film’s sluggish pacing is unnecessary, as are the half a dozen scenes of Alice pulling out her own hair. One, maybe two, would suffice and make the point, but Nighy keeps going. There’s also a distasteful subplot about a missing girl who is presumed to be dead. This story line serves as a heavy-handed metaphor that’s tacky and obnoxious, suggesting that is Alice doesn’t leave Simon, she’ll end up murdered in the woods someday, too. I found this component of the story to be so thoroughly off-putting that it overshadowed the rest of the film. The ending is borderline corny camp, too.

“Alice, Darling” tells an important story about how self doubt can be detrimental to finding the courage to stand up, let go, and move on. Too bad it isn’t more subtle (or effective) in its messaging.