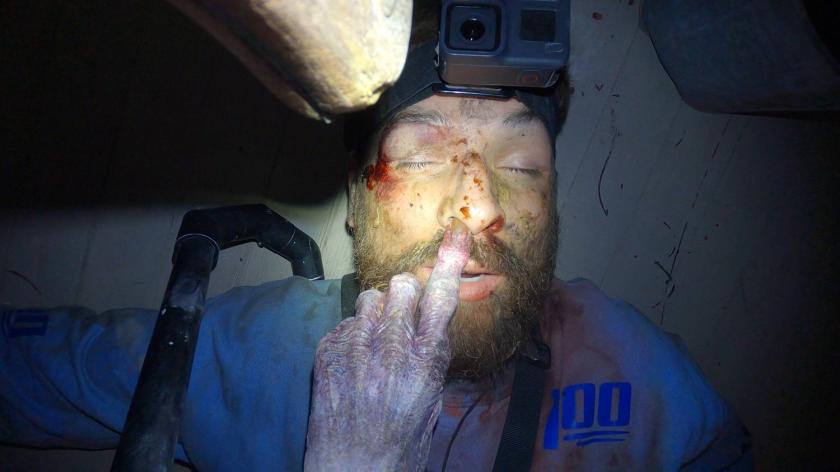 I am so in love with “Deadstream,” a super low budget horror film that reminds me of a goofy version of “The Blair Witch Project.” This microbudget indie is funny, creative, playful, and is a tons-of-fun midnighter.

Washed-up internet personality Shawn (Joseph Winter) has left the cyber spotlight after a very public and controversial stunt alienated his fans. Desperate to win back viewers and sponsors, Shawn decides to embrace a live stream gimmick: spending the night, alone, in a haunted house. He documents his terrifying evening in real time, placing night vision cameras throughout the house.

The story is cleverly told through raw camera footage and live chats from Shawn’s fans and viewers. The screen is often split with a sidebar of the always-evolving chatter and live discussions, and the conversations that move as quickly as a person can type. You have to pay attention because the film has a constant flow to the visual storytelling aspect, which makes it feel interactive. It’s even more fun when some eagle-eyed fans spot some strange occurrences in the background. Turns out it’s a vengeful spirit that is hell-bent on ruining Shawn’s evening, and it’s crystal clear that the next 12 hours are not going to be pleasant for him.

There may not be much substance to the script, but it’s funny and is a good story. You’ll know from the opening sequence if the film matches your sense of humor and if you’re already laughing, go ahead and settle in and buckle up for more. It’s silly but not stupid, and that’s crucial when it comes to the horror-comedy genre.

The budget special effects are hilarious and downright awesome, especially if you appreciate campy horror. There’s not a lot of finesse to the makeup or costumes, but they perfectly complete the tone and overall aesthetic of the project. In fact, everything about this film appealed to me, from the storytelling to the lead performance to the jump scares to the juvenile humor.

I admire and respect inventiveness and creativity, and “Deadstream” is a perfect example of both.