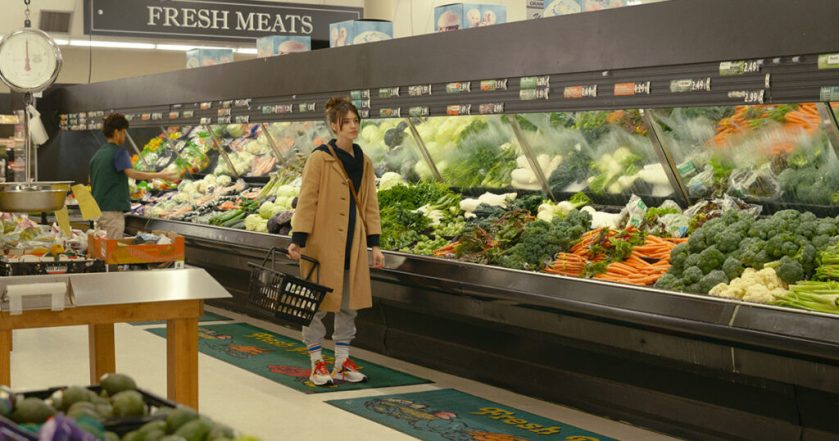 I don’t know how to begin this review of “Fresh.” I loved the film so much, and I don’t want to spoil its twists, turns, and surprises before audiences get to experience it for the first time. It’s best to go in blind, and I will do my best not to offer up any spoilers. In fact, I suggest you don’t even read this review until you’ve had a chance to watch it.

Noa (Daisy Edgar-Jones) has a real-life meet-cute with the awkward, charming Steve (Sebastian Stan) in the produce section of her neighborhood grocery store. She gives him her number, never expecting to hear from him. A few days later, they go on their first date at a local bar and find their romantic chemistry is off the charts. Noa is smitten, ecstatic that she has finally found a real connection after years of disappointment from guys she met on lame dating apps.

With their passion heating up, Steve invites his new flame on a weekend getaway to the nearby mountains. Noa quickly accepts, much to the dismay of her wary best friend Molly (Jojo T. Gibbs). Molly can sense some creep vibes loud and clear, voicing her concern about red flags (like Steve doesn’t have any social media accounts). But Noa dismisses them, packs her bag, and heads out for a weekend of romance.

You can probably guess that what follows is not the getaway of Noa’s dreams. Steve has something else in store for the young woman, and calling it sinister is just scratching the surface. This is a psychologically terrifying movie, and writer Lauryn Kahn and director Mimi Cave take the genre to a different level. The real horror lies in the plausibility of the story, which makes it so scary. I could see this actually happening, so, you know, OH MY GOD!

Having a female writing / directing team serves the themes well, and their approach is one that I feel is even more effective because of their gender. This is the type of set-up that women in particular understand, and they nail the feminine psyche here. The sad reality of the modern dating world is that you have to always be on guard. Trusting men isn’t something to do right away. It’s frightening because on the surface, Steve seems “safe.” He’s a successful plastic surgeon, he’s charismatic, he says all the right things. He’s only creepy if you’re looking for it, and most of us would let our guard down around a guy like that. Watch this film and you’ll never give any first date the benefit of the doubt ever again.

This a sick idea for a movie, and there’s plenty of blood and gore. The premise is horrifying and terrifying and downright gross, but the themes elevate it above typical slasher flicks. The film has a lot to say, and says it well. The script is witty and perceptive, wrapping the fashion industry’s beauty ideals for women into a blazing commentary on how society views females and their bodies as objects that exist for male pleasure and desire, with a horror genre spin. Steve thinks he can use women in any way he wants without suffering any consequences, something that seems to be a disease among some charming, rich, white guys. That privileged attitude leads the character to make some pretty serious mistakes, which turns this film into one of female empowerment.

“Fresh” is high octane feminist cinema in a “Promising Young Woman” meets “Raw” sort of way. It’s a shockingly effective debut feature from Cave, and this is a memorable, stomach-churning, socially conscious horror film that has something important to say.