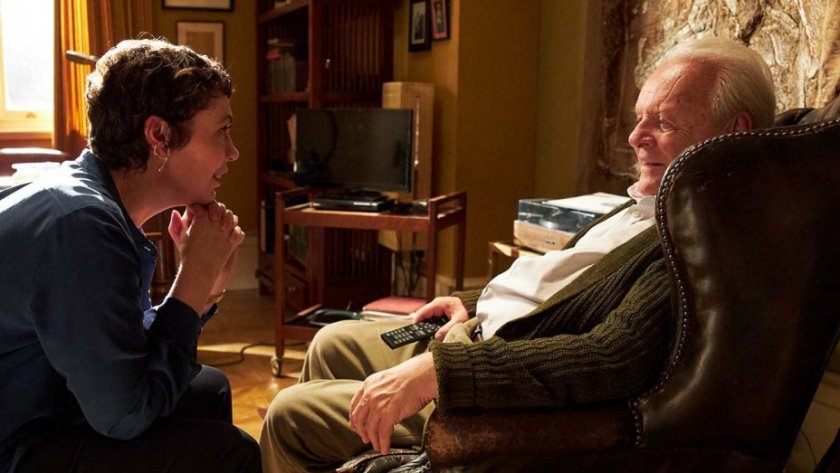 “The Father” gives its audience a fully immersive experience with the frustrations of dementia in this stage-to-screen adaptation of Florian Zeller‘s 2012 play. Making his feature film directorial debut, Zeller gives the project a personal touch with much emotional gravity, as he’s so intimate with the source material. The film has the look and feel of a stage play, but it thrusts audiences into the main character’s head in a way that only the medium can achieve.

Anthony (Anthony Hopkins) is growing increasingly confused in his day-to-day activities. At first he can’t remember where he left his watch, but later he doesn’t know if it’s morning or night. The man sometimes doesn’t recognize his daughter Anne (Olivia Colman), and he confuses his caregiver Laura (Imogen Poots) with others in his life with increasing frequency. As Anthony’s mind continues to decline at an alarming rate, he starts to have severe mood swings that are brought on from the frustration of his lifetime of memories slipping away. He refuses assistance from Anne, who is trying her best to help him cope. Change is never easy, but Anthony’s paranoia grows as the fabric of his reality unravels.

The film features excellent turns from Hopkins and Coleman, two seasoned actors who carry the dialogue-heavy film. It’s fantastic work from both of them. Zeller puts viewers into Anthony’s shoes, adopting the old man’s mental state as he questions what’s real and what’s imagined. You’ll begin to wonder if his daughter and nurse are playing cruel games on him, with a sense of doubt that’s contagious. Something isn’t quite right, and the conflicting distractions offer a puzzle with no easy solution.

The intentional misdirection is a bit gimmicky and the pacing slow, but “The Father” paints a poignant and effective (if depressing) picture from the point of view of a person struggling with dementia.