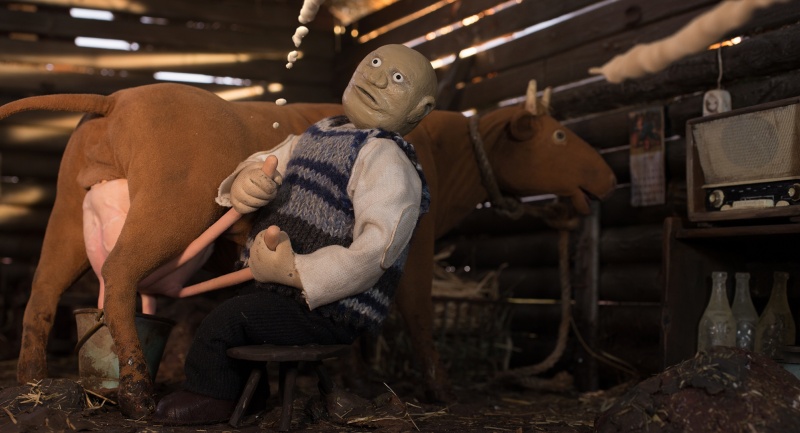 Gonzo animation is a love-it-or-leave-it genre, but fans of absurd cinema will want to check out “The Old Man Movie,” an eclectic stop-motion film from Estonia. This hilariously vulgar and disturbing movie is fat with sidesplitting sight gags, bathroom humor, and plenty of flying milk (and pig poop).

When their parents drop them off for an extended stay at their cantankerous grandfather’s farm, siblings Mart, Priidik, and Naim are immediately put to work. Sad that grandpa is abusive towards his prized cow, the kids leave the barn door open and the heifer escapes. Facing a mob of angry, milk-hungry villagers, the cantankerous old man and two of his grandkids set off on a tractor to bring the cow back home — before her udder explodes and causes a “Lactocalypse.”

Co-directors / writers Oskar Lehemaa and Mikk Mägi set up the jokes well, and most of them pay off in a big way. There’s a ton of visual humor and deadpan wisecracks, and the whimsical, textured figures with dead eyes and mouths that don’t move give the story a surreal feel. The characters are surprisingly well-developed, especially the drunken, abusive, real asshole of a grandpa. The trio of siblings is funny too, and the random neighbors that pop in and out of the story are good for a few laughs as well.

I’ll stress again just how bizarre this film is. There’s a nemesis who is made entirely of dairy (his blood is buttermilk), and there are a series of offbeat adventures on their quest to find the lost cow that range from highly comical (the run-in with a tribe of hippies in the woods), to peculiar (the “ritual of tree dancing” with a randy ancient spirit), to sincere (the film has a heartfelt animal rights message). Just when you think the weirdest thing ever has just happened, you’d better hang on to your hat because you ain’t seen nothin’ yet.

This is a super strange movie, and the European humor may be more of an acquired taste than what typical American audiences are used to seeing, especially in animation. Festivals like Fantastic Fest exist for films like this one, and those who tend to enjoy midnight movies or original, offbeat stories and art will find a lot to love.

This film was screened at Fantastic Fest 2020