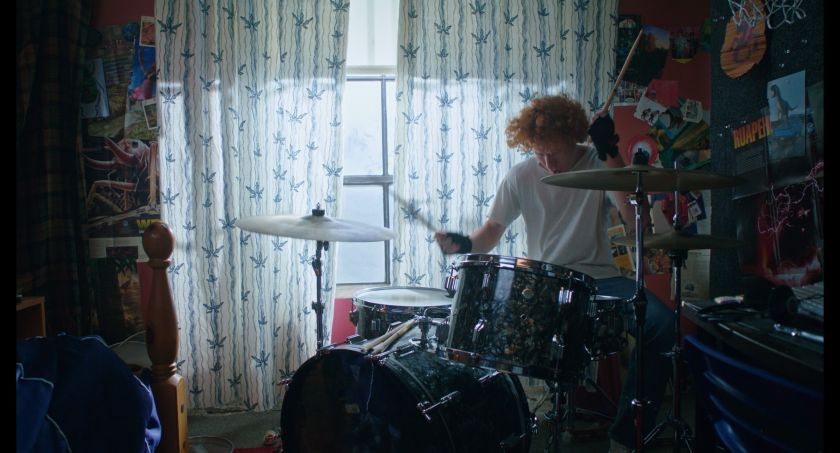 Fictional rock band Stylo and the Murder Dogs gets a chance in the spotlight in “Teenage Badass,” a funny, touching, and surprisingly insightful film director Grant McCord. If you’ve ever been in a band or ever dreamed of becoming a famous musician with your buddies by your side, you’ll find an original screenplay that’s filled with authenticity, humor, and pitch-perfect accuracy.

The film (co-written by McCord and Matthew Dho) is set in 2006 and tells the story of teenage drummer Brad (Mcabe Gregg), who lives in Arizona with his single mom (Julie Ann Emery) and struggles to keep the money coming in by helping her clean houses. Brad has big ambitions of living his life in the spotlight as a rock star, and his supportive mother encourages him to never give up.

When an opportunity to join a gig falls into his lap, Brad lands a shot to play along with band leader Kirk Stylo (Evan Ultra) and his friends on a local news show. With the town is abuzz after their performance, the band is asked to record with a low-level local producer (Kevin Corrigan), turning their dreams into a possible reality. As is life, things don’t exactly fall into place in the smoothest way possible, and a chain reaction of chaotic events further threatens their pathway to stardom.

The casting is perfect and the characters relatable; they’re a bunch of likeable losers who believe in their rock band. They see the music world through rose-colored glasses, making it impossible not to root for them to succeed. You’ll have a deeper appreciation for the material if you’re a musician yourself or if you’ve ever joined a band (or even if you’ve just known someone in a band). The script has a knowing authenticity that obviously was penned by a duo who knows and understands the life, struggle, petty drama, and the probable career trajectory of an immature, independent artist. The banter is so insightful that at times it feels like you’re watching a documentary.

The film lags a bit at the beginning when it gives off a mumblecore vibe, leading to a handful of overly long and unnecessary scenes that don’t serve much purpose for propelling the story forward. There’s a sudden shift in tone after a longtime girlfriend of the lead singer pulls “a full-blown Yoko” and other story lines turn to weighty subjects like substance abuse and rehab. The serious stuff comes across as a plot device and not much else, but the humor has such an honesty and heart that it’s easy to overlook the film’s few flaws.

The story ends on a touching note and is an earnest ode to those who start at the bottom and stumble on their quest to get one step closer to their dreams. It’s a reminder to celebrate the little victories along the way by being a good band mate and a good friend, while fostering a tiny little family of misfits.

“Teenage Badass” is a movie with heart, soul, and a little bit of rock and roll.