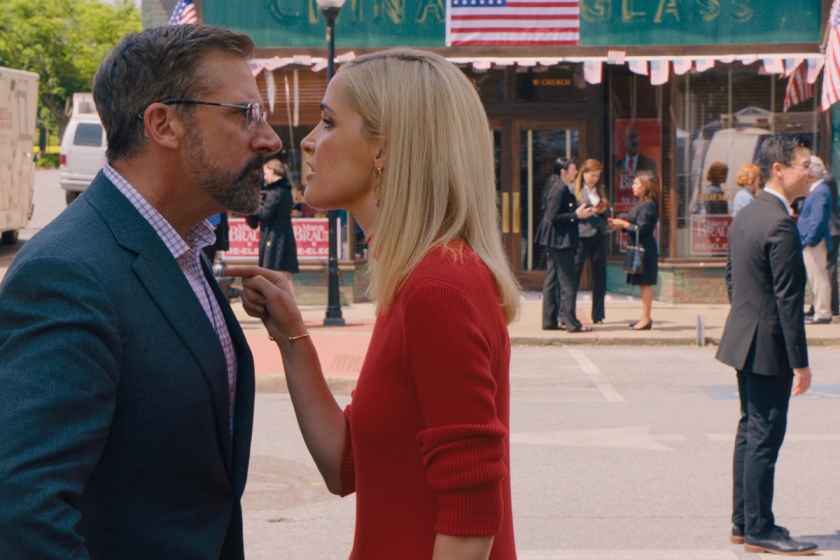 There is a group of folks who will absolutely hate “Irresistible,” the new political satire from writer / director Jon Stewart. They’ll equate it with beating a dead horse, finding it to be an aggravating exercise in what they like to term “liberal elitism.” Then there will be the politically-minded viewers in agreement with Stewart who will voraciously slurp up what is dished out on screen, shouting an internal “Amen!” as the story preaches to the choir. Neither will be completely wrong, but reactions and reviews will likely be split along political lines — or your noted tolerance for intellectual sarcasm.

The politically-charged dramedy is about what happens when a small Wisconsin town becomes the main attraction at the heart of a political circus. When Washington, D.C.’s top Democrat strategist Gary (Steve Carell) is sent a video of retired Marine Colonel Jack Hastings (Chris Cooper) standing up for the rights of local undocumented workers at a town hall meeting, he begins to salivate at the possibility that he may have just discovered the potential key to winning back the red-leaning Heartland. Gary comments that Jack “looks conservative, but sounds progressive” and devises a plan to convince the man to run for Mayor — as a Democrat.

Big-money Republicans begin to notice as Jack’s campaign takes off and send in a powerful counterattack in the form of Gary’s brilliant political consultant nemesis (and Fox News favorite), Faith (Rose Byrne). What started out as a local race rapidly spins out of control as the two pundits attack each other in increasingly personal and cutthroat ways in their fight to come out on top.

The comedy aspects start out with basic, lukewarm, fish-out-of-water gags as Gary adjusts to small-town life (he makes a disgusted face every time he’s served a bottle of Budweiser, for example). The funniest, smartest bits really get going when the mayoral race is given the Presidential-style election treatment. The over-the-top political strategy includes increasingly ridiculous campaign ads and stunts, all designed to win the favor of the town’s undecided voters. Stewart knows that his audience is smart and never stoops to explaining his jokes, which provides a refreshing contrast from films that have a tendency to treat viewers as idiots.

There’s a strong commentary that’s critical about everything from super PACs, the media, the quick dismissal many Democrat strategists employ in the flyover states, and a takedown of campaign finance laws, noting that fundraising is one of the most blatant examples of accepted corruption in America’s political system today. It’s absurd how much money is poured into campaigns, and Stewart strongly makes his case with this tale of political discourse.

In case your preconceived notions are expecting it, you should note that Stewart doesn’t make the rural voters in America’s heartland out to be stupid dolts. It’s quite the contrary. In some cases, the plain and simple country folk are the smartest people in the room. That’s not to say that Stewart hides his one-sided political stance (he doesn’t), and his snarky brand of commentary combined with an impassioned liberal viewpoint may turn off some closed-minded viewers. But the film hopefully will serve as a motivator to encourage people to get out and vote in November, and is a reminder that so many of us are too comfortable in our ideological bubbles that we often forget to reach out to the other side.

The film ends with a strange “gotcha” style twist that manipulates the audience, much like the entire campaigning system it’s attempting to satirize. The conclusion is a bit of a letdown, but “Irresistible” makes a valid point about our country’s divisive party politics.