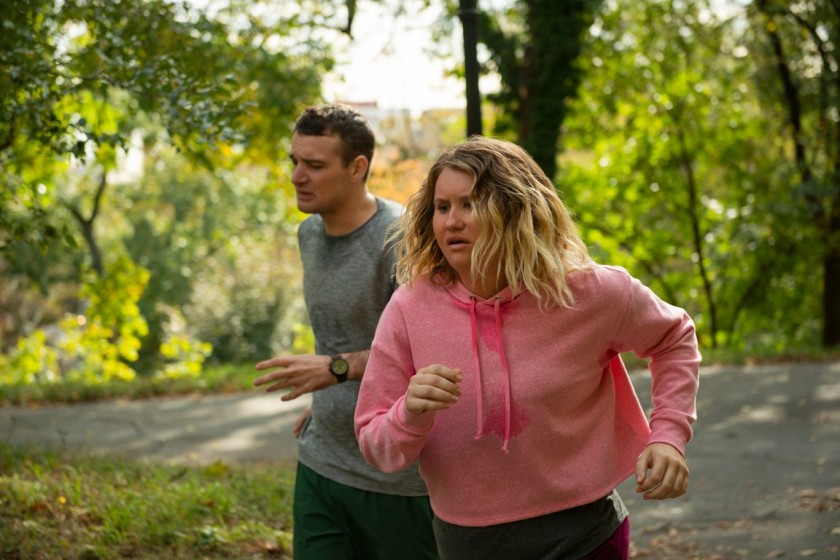 I really don’t have much to say about “Brittany Runs a Marathon,” a generic, forgettable, feel-good inspirational movie that’s loosely based on a true story about an overweight and unhealthy young woman who decides to train to run the New York Marathon. While this dramadey may be well-intentioned, its tone is uneven and filled with too much fake uplifting baloney.

Brittany (Jillian Bell) is a mess. She’s in her late twenties and feels lost. Her diet consists of donuts and an overindulgence of alcohol, and she’s party of the late-night club hopping party scene. She’s known to her so-called friends as their fat sidekick and wingman. When Brittany visits a clinic to score prescription Adderall to get high, the doctor forces her to face reality: she needs to lose about 50 pounds or she will be headed down a path of lifetime health problems. The next day, Brittany hits the streets of New York and starts running, taking baby steps until she builds up to a 20-plus mile marathon.

The film is motivational, but you can tell it speaks to thin folks who’ve never struggled with their weight. That’s not to say this is mean-spirited towards overweight people (it’s not), but it’s far from friendly. The realistic scenes, such as her friends encouraging bad habits to keep her heavy and showing how overweight people are sometimes invisible to society, hit the nail on the head. And once Brittany starts to lose weight, her insecure roommate (Alice Lee) tears her down — just when she finally starts to feel good about herself.

There are a couple of bright spots here, mostly from the supporting cast (Michaela Watkins and Micah Stock), and especially Utkarsh Ambudkar as Brittany’s boyfriend Jern. He’s a great character, thoughtfully written and authentic. It’s so nice to see a male character that isn’t paper thin (something that’s sadly becoming a rarity on film). Bell is perfectly cast, and her brand of self-deprecating humor and slight snark serves her character well — until she starts to shed those pounds.

The problem is that Brittany is a total jerk and hard to like, much less root for. I wasn’t sure if I was supposed to clap when (spoiler alert) she eventually runs the marathon, but the truth is that I really didn’t care. At all. By that time, Brittany has become a super jackass. She’s newly-thin and has become a bit of a bully. At a party, the former “fat girl” insults another overweight woman. It’s super mean, was pointless to include in the film (she learns absolutely nothing from this behavior), and it made me absolutely hate Brittany.

I guess the point is that people who are naturally skinny just don’t understand the struggle, and this film likely won’t become a beacon of enlightenment for them. At least the film doesn’t overtly poke fun at chunky folks, but it’s patronizing in a way that’s a complete turn-off. Many of us have heard how small steps can add up and change your life for the better, and others have been lectured or chastised by their doctor. I’m sure the movie is meant as a motivator to encourage viewers to set a goal and just go for it, but I fear those who could stand to lose more than a few pounds may be discouraged further.