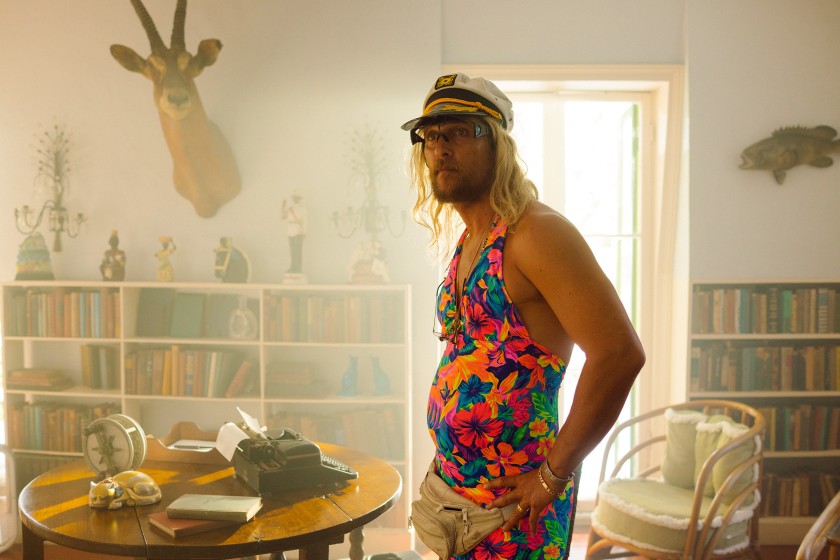 I get the feeling that “The Beach Bum” is exactly what it would be like to spend a few days hanging out with actor Matthew McConaughey. When he isn’t shirtless playing the bongos while smoking premium weed, he’s wearing women’s clothing and dancing drunkedly in the streets, laughing with his trademark easygoing drawl. Let’s just say his role as stoner poet Moondog in outlaw director Harmony Korine‘s feature doesn’t feel like much of a stretch. McConaughey is what makes this unfocused undertaking wildly watchable, even when the film fumbles and becomes stagnant.

The film follows the misadventures of rebellious poet Moondog, a living, breathing beach bum. He does a little of this and a little of that, a social transient who brings joy (and massive amounts of weed) to all he encounters. His story is told with humor, but it also glamorizes the genius of his laziness.

Overall the film lacks much of the biting, subversive elements that made “Spring Breakers” so provocative. When the story dips its toes into edgier territory, it often does so in a mean-spirited way. Take Zac Efron‘s son of a preacher man punk called Flicker, a bad influence who lacks all moral character. Flicker shrugs away all of his misbehavior, including vandalism, petty theft, and violence against handicapped senior citizens, claiming that Jesus died for all of his sins. This probably looked better on paper than it ultimately was translated to the screen, a lost opportunity for Korine to exploit his typical biting societal critique.

The movie is still very smart and very funny, even if all of the elements don’t quite work as a whole. Some of the performances feel a bit too much like stunt casting to seamlessly gel with the rest of the film’s vibe. Along his journey to redemption, Moondog encounters a list of wacky characters, some more memorable than others. The very best vignette features Martin Lawrence as inept and aptly named tour boat entrepreneur Captain Wack; the worst is Efron’s. There’s Snoop Dogg as Lingerie, an easygoing rapper slash drug dealer who is stepping out with Moondog’s rich and boisterous missus (Isla Fisher), and Jonah Hill in a supporting role as Moondog’s agent. Hill plays the character with absurd mannerisms that are so over the top you can’t help but laugh. Despite the motley cast, they manage to be held together by the strength of McConaughey’s relaxing screen presence and infinite charm.

This is a film that tries your patience to the limit, yet it’s enthusiastically affable. There are long scenes of what amount to dead air, but Moondog’s lust for life and living keep him engaging. He’s not a hero, nor is he someone who should be lauded as much as he is by the people around him, but there’s something freeing as you sit there watching as a washed-up reject extends his middle finger (or flashes his bare bottom) to society.

“The Beach Bum” is well made and acted but ultimately more of a disappointment that it should be because, especially considering its writer / director’s pedigree, it has nothing substantial to say. Perhaps that’s the goal Korine was reaching for, to remind us of the meaningless of it all. There’s very little significance to the story but with its carefree Jimmy Buffet style vibe, the film could easily make its mark in the long line of lazy day stoner flicks.