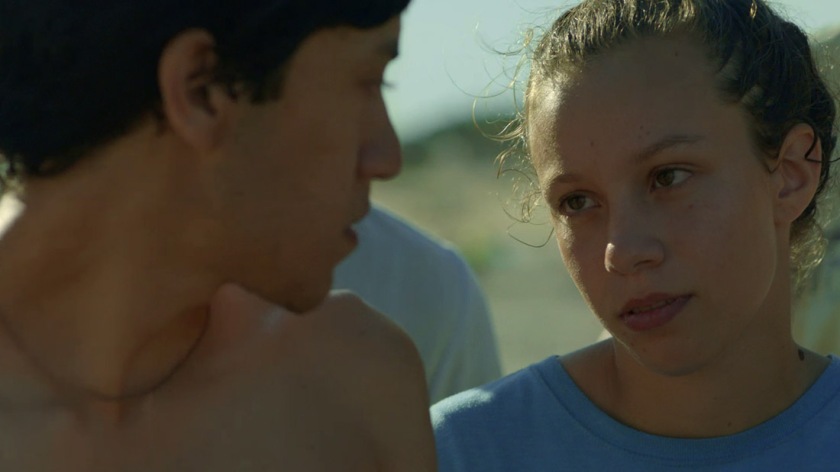 The theme of isolation may make for a good story, but it also makes for a dreadfully boring movie. So is the problem with “The Sharks,” a coming-of-age story that is too quiet for its own good. Comprised mostly of filler like long, pensive stares or mundane rides in the back seat of a car, this slow moving film has plenty to say but takes too long to get there.

Fourteen year old Rosina (Romina Bentancur) is happy to squander her summer days doing light landscaping work for her dad and walking along the sand in her beachside town. During one of her swims she spots a dorsal fin, creating a shark panic among the residents. Meanwhile, Rosina becomes infatuated with an older coworker named Joselo who sends out overt sexual signals which ultimately confuse her. She likes Joselo but doesn’t know how to behave with a boy. Once he starts to pull away, Rosina becomes unhealthily obsessed with reclaiming his affections and turns to some pretty awful means to get it, including dognapping Joselo’s pregnant pet.

This is director Lucía Garibaldi’s first feature, and she’s quite a talent behind the camera. Her script could use a lot of beefing up, however. The movie is filled with symbolism, but I struggled to find much meaning in it. Still, Garibaldi writes with an honesty about fluctuating teenage desires and the time in a girl’s life where one can accidentally stumbled into an act of emotional violence (one of Rosina’s more dangerous foray into poor choices involves Joselo’s boat and could lead to seriously bodily harm).

This isn’t a bad film, I only wish it was a lot tighter and polished.