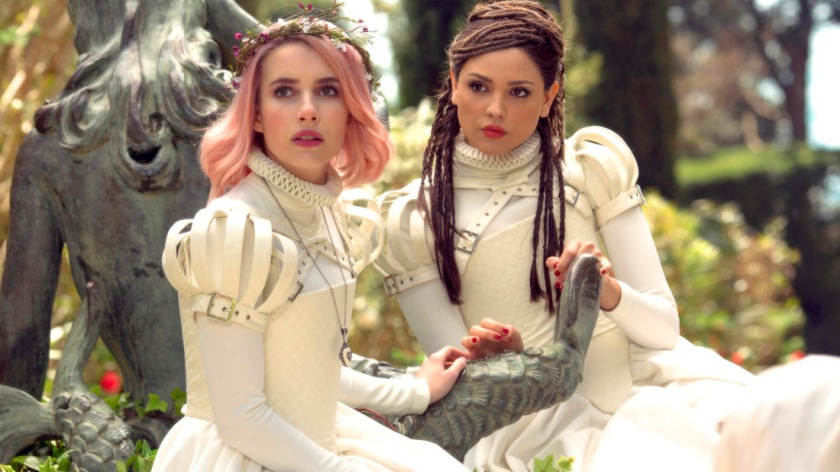 Sometimes a film can be a mess story-wise but is so well made and has something so interesting to say that it would be a crime not to applaud the effort. That is the case with “Paradise Hills,” the ambitious feature film directorial debut from Alice Waddington. Waddington is one of the most exciting filmmakers I’ve seen in years, a true visionary talent with a deft eye for cinematic storytelling. Her film may feel a little too much like it was the product of a film school 101 workshop on symbolism and metaphor, but it’s impossible not to admire her original sci-fi / fantasy take on a woman’s viewpoint of societal oppression.

In what could be described as David Lynch meets “A Clockwork Orange” meets “Alice in Wonderland,” the film has a surreal, fractured fairy tale vibe. Uma (Emma Roberts) wakes up as a captive on a strange island called Paradise. Confused and alone, she seeks answers about how and why she is there. The sinister Duchess (Milla Jovovich) runs the facility for privileged young women, a boarding school where families send their “embarrassing” daughters to be reformed so they may fit in with proper society. Everything at Paradise is hyper-feminine, from the salad-heavy diet, frilly white dresses, pink bedrooms, and corsets the girls are forced to wear.

After scheming with her fellow misfit roommates Yu (Awkwafina) and Chloe (Danielle Macdonald), Uma discovers a malevolent secret behind the rose-covered, prim-and-proper exterior. The new friends band together, willing to fight to the death for their independence.

The film explores the antiquated expectations of young women, denouncing the constant preaching of the “desirable” traits of learning your place and aspiring to be submissive rather than strong-willed. The message will no doubt resonate with women who are fed up with society’s demands for perfection. Much of the story feels as though it was made by an older, wiser woman talking to her younger self. It’s a brilliant idea that’s well executed, for the most part.

What doesn’t work here is the overstretched script. The film could lose a good 25 minutes of very slow filler that doesn’t serve to advance the story. The premise is excellent, but the film takes way too long to make its point. (Patient viewers will be rewarded by the last half of the film, it’s more than worth suffering through the extremely dull bits to get there). The over-the-top insistence on making everything an expression of symbolism is also highly irritating, but likely the mark of a new filmmaker finding her voice. I’ll forgive the costumes that look like literal cages this time around.

The most jaw-dropping aspect of this film is its incredible flair, an indie film with a small budget that has blockbuster sensibilities. The movie looks as though it was filmed on a grand scale, with opulent costumes and a structured production design that rivals anything you’ve seen from the major studios.

“Paradise Hills” may prove to be exasperating at times, but it’s brazen, interesting, and one worth admiring for its gutsy originality. What a beautiful mess indeed.