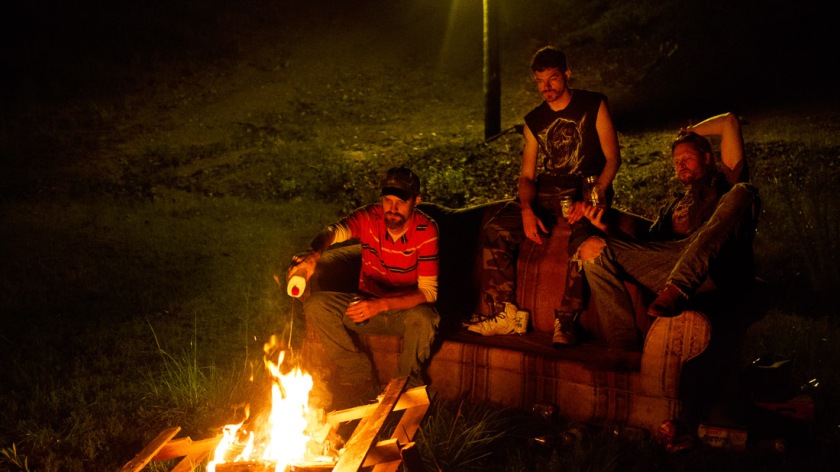 Note: This is a spoiler-free review.

I’m far from a prude, but the big “twist” in “The Death of Dick Long” proved too much for me to take. It’s not the actual cause of Dick’s death that bothered me, it’s that the film went too far by taking the dramatic route instead of playing it totally for laughs. If the film’s comedic, outrageous, sarcastic tone had held through to the big reveal, it would’ve been a winner.

The story starts off with a loving tease of the true Southern experience, with a look at the quirky characters who inhabit a small town in Alabama. There’s the inept police department (Sarah Baker, Janelle Cochrane), the local yokel bumpkin neighbors, and Dick (Daniel Scheinert) and his redneck friends Zeke (Michael Abbott Jr.) and Earl (Andre Hyland), who have their own Nickleback-loving garage band. One night after practice, things “get weird.” After a montage of beer chugging, shotgun firing, and a box full of fireworks, the film jumps in time to several hours later. Dick is bleeding profusely in the back seat of Zeke’s car, and his two buddies drop him outside the hospital and run off.

The rest of the film focuses on the two buddies and their inept attempts to cover up what happened after they find out Dick has died from his injuries. These guys aren’t too bright, but they’re likeable idiots. The big mystery isn’t revealed to the audience until close to the end of the movie, with clues shared in a trickle to keep everyone guessing as to what actually killed Dick. (No spoilers here, but it’s not a letdown).

Screenwriter Billy Chew’s dialogue is naturally funny, especially early on. The casting and writing click perfectly, with a flawless deadpan delivery from the cast. These guys feel like real people and not overly eccentric characters. The problem comes with the eventual horrible revelation as to the cause of Dick’s death. It’s repulsive but funny at first, when it’s played for laughs. But then the story gets too somber and serious when a key fact is presented that makes these men so revolting that it’s hard to overcome. All of a sudden it’s difficult to laugh at them, and it’s certainly impossible to continue to like them for what they’ve done for years.

Throwing around words like “wacky” and “kinky” to describe this project may be technically accurate, but it also paints a picture of something the film is not. It’s wildly funny until the dramatic shift in an ultimately unpleasant story, when the movie turns on itself and gets nasty. You could argue that the film is a depressing and sad look at the trappings of modern masculinity, but I think that’s giving the film too much credit. As a female, perhaps that theme was lost on me. I couldn’t recover from the disgusting shock of the revelation.

The film isn’t a total loss because the first half is really amusing, Daniel Scheinert‘s direction perfectly complements the material, and the cast nears perfection. Comparisons to Bobcat Goldthwait’s 2006 film “Sleeping Dogs Lie” are inevitable. And one thing is guaranteed: you’ll never, ever want to hear the phrase “ya’ll wanna get weird?” ever again. Well, that and Nickelback. You’re welcome.