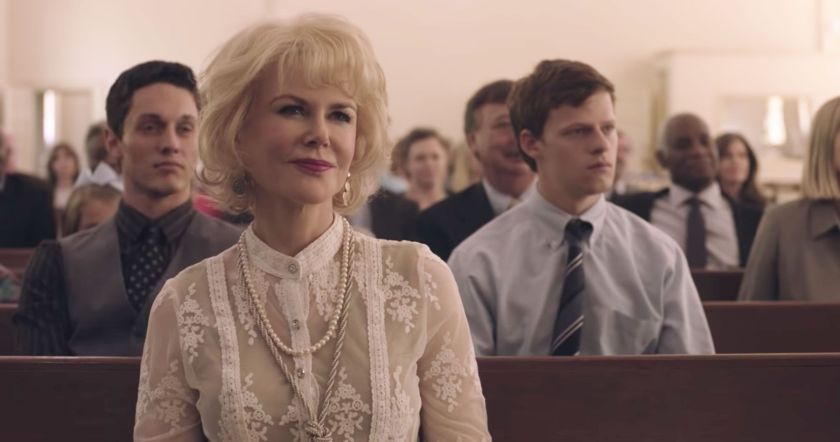 Family drama “Boy Erased,” the true story of a Baptist pastor’s gay son who is sent off to conversion therapy in the 1990s, spends most of its time playing catch up to the similar (and superior) “The Miseducation of Cameron Post” –a film that did it better earlier this year. Despite a talented cast and the best intentions, the ho-hum choices from director Joel Edgerton and the standard issue script ultimately fail to forge a meaningful emotional connection with the audience.

Jared (Lucas Hedges) is 19 when he’s outed to his conservative, religious parents (Nicole Kidman and Russell Crowe) and is faced with an ultimatum: attend a camp that will help control his “unnatural” urges or be permanently shunned by his family. The story, based on the personal memoirs of Garrard Conley, examines the struggles the young man faces while being forced to question his true identity.

One big positive is that this story seems almost irrelevant in today’s more accepting climate for homosexual youth. To avoid sounding callous because it was incredibly brave for Conley to share his true experiences, the film would’ve made a larger impact if it had focused on the young man’s sexual assault. The aftermath of a rape where a gay teen has nowhere to turn is so sad, and it’s something that’s rarely (if ever) discussed.

The characters and ideas presented are as conventional as the lack of filmmaking craft. There’s the strong mom who truly cares, the stern and strict dad, and the unqualified leader of the conversion camp (Edgerton) who embodies the very idea that religion encourages hate towards some classes and groups. The story is as predictable as it is frustrating, but luckily there’s that one moment that makes the entire film. Here that anchor takes place in a brief and moving scene where Jared comes out to his parents in the kitchen. The disappointment and subsequent shame on their faces deals an effective blow.

While Kidman is mostly going through the teary-eyed motions, Crowe is the standout in his supporting role because he manages to make a devout preacher sympathetic, even when he seeks counsel and ultimately sends his son away to be deprogrammed. The arguably talented Hedges has yet to convince me that he’s more than a one-trick pony because he gives a similar performance in every one of his films.

The lengthy epilogue is too preachy and drags the film down. Overall, “Boy Erased” seems to be little more than slightly insincere Oscar bait.