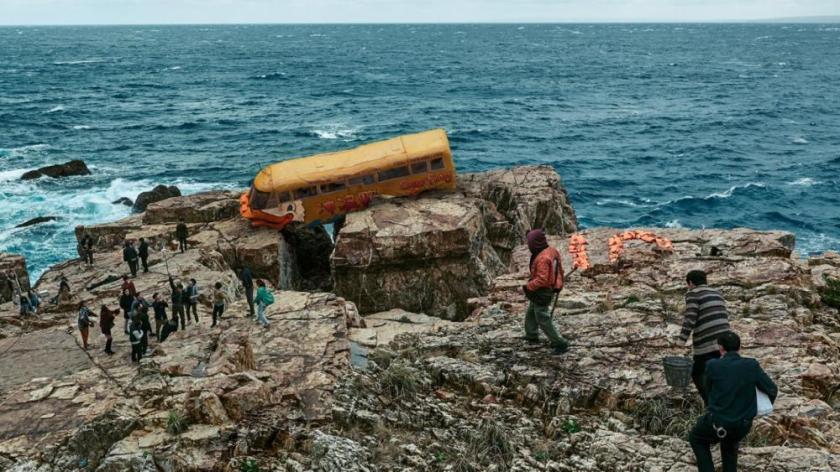 It’s everyone’s worst nightmare: on the day you win the lottery with a mega-million payout, a freak act of nature lands you stranded on a deserted island with no way to collect your newfound windfall. So is the basic setup of “The Island,” an offbeat dramedy from director Bo Huang. The film is a runaway hit in its origin country of China, but its sprawling story and lengthy runtime may prove to be a little challenging for many viewers.

It was supposed to be just like every other normal day for buddies Ma Jin (Huang) and Xing (Yixing Zhang) on the morning of their office-wide team building trip. But just as the group embarks on their adventure, their tour boat is rammed by a giant wave, leaving the office workers stranded on a deserted island in the middle of the ocean. With little hope for rescue, tensions begin to flare and two competing factions develop.

The film is a survivalist drama that feels like “Lord of the Flies” meets “Gilligan’s Island.” Chaos reigns as those in charge are loved then hated by the masses. First they work as laborers until a system to set up a capitalist island economy is devised. Eventually, they are seduced by a leader who tells them what they want to hear and thus sealing their fate. It’s a thinly veiled satire on the gross abuse of power.

The lighthearted moments work the best, with some universally funny workplace gags about office romances with a beautiful woman (Qi Shu) and shortsighted bosses (Hewei Yu), and there’s a spectacular (if more than a little ridiculous) disaster montage opening sequence with explosions, a tsunami, whales, and a bus that glides upright underwater.

The film is polished with snazzy special effects and an eclectic soundtrack, but this one will likely puzzle American audiences with its inconsistent humor and cultural differences. This isn’t to say mainstream U.S. audiences can’t enjoy the movie, but it certainly will feel a little strange to most.