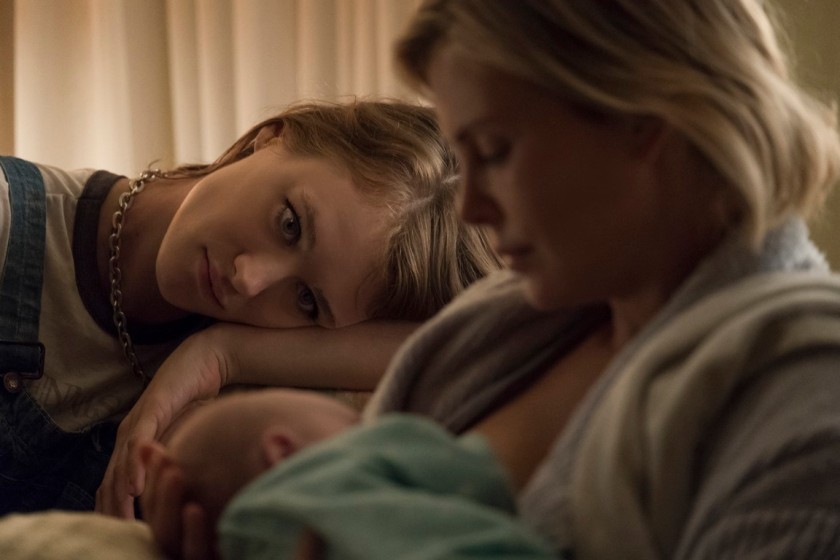 As I was screening “Tully,” I started to get this gnawing feeling in the pit of my stomach that later turned out to be a bout of foreshadowing. Somehow I knew that I was likely going to have an unpopular opinion on this film, the latest collaboration from indie cred powerhouse team Jason Reitman (director) and Diablo Cody (writer). While there are some things to admire, I found this one to be a boring display of what I like to call ‘critic bait’: a movie targeted at film journalists who will believe anything put onscreen from these two is worthy of never-ending praise.

Marlo (Charlize Theron) is a frazzled forty something mother of three (including an unplanned newborn), and she and her one-dimensional husband Drew (Ron Livingston) are feeling overwhelmed. The house is a wreck, frozen pizza is what’s for dinner every night, and Marlo doesn’t get any sleep at all. Things change for the better when her wealthy brother (Mark Duplass) gifts her a night nanny. After a brief period of resistance, the exhausted mother breaks down and calls the service and Tully (Mackenzie Davis), an eccentric, free-spirited young woman who is wise beyond her years, arrives at her doorstep. Marlo is revived by this ball of positive energy who lives in an unburdened world of ideals and dreams. Tully’s whole life is ahead of her and filled with boundless potential, the very opposite of Marlo (who feels she’s wasted her life by settling down).

The film is supposedly an ode to the ‘modern parenthood experience’ that’s interspersed with ‘humor and raw honesty.’ I wouldn’t know because I don’t have kids. Perhaps this realism is lost on me because I’m not a parent, but that’s where the film breaks down: it failed to spark even an ounce of empathy in me for its protagonist. Motherhood is portrayed as many childless people like me envision, an absolute misery of an existence (I left the theater thinking thank god I don’t have kids). A successful film would have made Marlo’s predicament relatable to everyone.

Theron is more than capable and proves she’s up to the challenge of the role and its physical demands, but this isn’t as Oscar worthy as some are crowing. How gutsy and brave her performance is! they’ll surely shout, all because she dons a partial fat suit (the actress also gained a very real 50 pounds for the role), doesn’t wear makeup, has unkempt hair and bags under her eyes. Interestingly enough, it seems to be those same critics who ripped Amy Schumer and her “I Feel Pretty” to shreds for ‘fat shaming’ or poking fun at the way women look. Candid and authentic simply because she doesn’t look like the gorgeous movie star that she is? I don’t think so.

The same can be said for Cody’s rough around the edges, unsubtle screenplay. This is far from her best work and for once, she seems to have written herself into a corner. Some of the narrative is so contrived that it’s dripping with cliché, crowded with irritating, pithy platitudes dressed up in a bright hipster bow. Worst of all, the film treats serious post-partum depression as a gimmicky afterthought and even tacks on a borderline inappropriate ‘gotcha!’ ending.

Reitman’s typically unguarded direction is well-suited for this material, but his heavy-handed style nearly implodes towards the end. I was ready to pull out my hair after dozens of visually repetitive scenes with muted lighting and even softer pop music (a reminder for us to buy the soundtrack, and preferably on vinyl).

There’s a decent story trapped somewhere inside that’s just waiting to get out, but “Tully” sadly misses the mark.