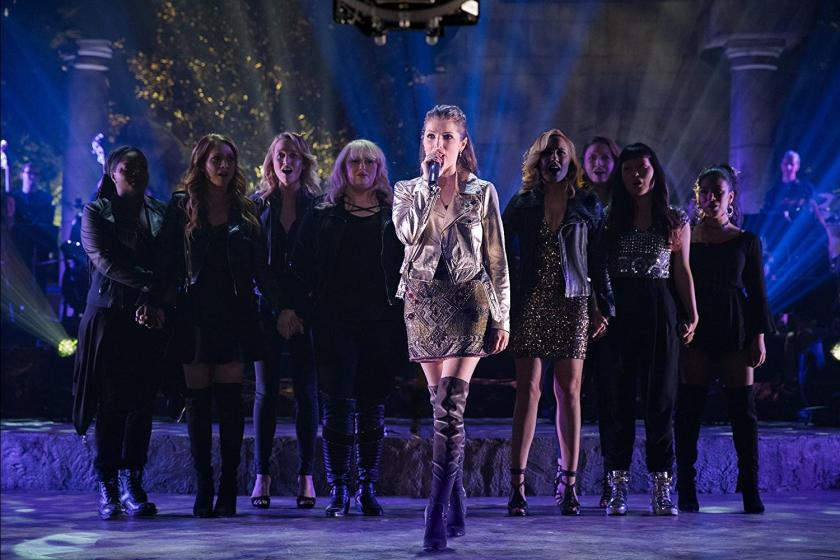 I’m really glad I was able to squeeze in a screening of “Pitch Perfect 3” before the end of the year because it is a serious contender for Worst Movie of 2017. I was this close to walking out of the theater in disgust because this one is so aca-awful.

Milking the last remaining drops out of characters who were unappealing to begin with, the plot centers around the all-girl acapella singing group the Barden Bellas. Their college glory days are over and the girls are now out in the real world. Missing their glory days, the Bellas reunite for an overseas USO trip to entertain the troops and find themselves competing in a contest to see who can become the opening act for a major world tour. If you think this story sounds ridiculous, just wait until the movie veers into action territory with explosions and hand to hand combat (no, really).

The one thing these films have going for them is the show stopping acapella musical numbers featuring fun costumes and hit songs. Sadly, the songs in this one are just awful and the singing, while proficient, is boring. When paired with a meandering, unfocused story, all of the elements come together to make it utterly unbearable.

There’s an absurd and ridiculous side story with Fat Amy (Rebel Wilson) and her long-lost criminal dad (John Lithgow) that makes absolutely no sense. There are random supporting characters who are briefly introduced and then don’t show up again until the final moments of the movie. Series stars Brittany Snow and Hailee Steinfeld are more cloying and annoying than ever before, a remarkable feat I didn’t think was possible until now. Even our hero Beca (Anna Kendrick) looks as if she’s sleepwalking through this mess.

Huge chunks of plot seem to be randomly missing, and several times I was thinking that something important story-wise was left on the cutting room floor. It’ll leave you asking “huh?” more often than not.

The big budget production values are otherwise decent, but this was definitely filmed for the short attention span set. The movie looks like it was edited in a blender by a three year old hopped up on Red Bull.

Not only does almost nothing happen in this movie, but the many unfunny attempts at humor are awkward and unpleasant. There are more sex-related and PG-13 jokes here than in previous installments, but they aren’t humorous and are included in the script for no discernable purpose other than simply “because we can.”

The most odious element of “Pitch Perfect 3” is also its most disappointing. For a film franchise that originally started as a bubbly serenade to female empowerment and fierce independence, there are far too many jokes about and references to decidedly anti-feminist things like getting “slutted up” to go woo an important man to the ladies all finding their “dreamboat” perfect match in the form of a cute soldier or British music executive. The women spend most of the movie trying to please superstar DJ Khaled (whose acting ability is about the same as your living room sofa) or sneering at a rival all-girl band called Ever Moist (yep).

This movie is so awful that I wouldn’t recommend it to my worst enemy. The Bellas have succeeded in hitting the lowest of the low notes, a sad farewell to what was once a lively and fun franchise.

I suspect co-writer Mike White scribbled down the screenplay for “Pitch Perfect 3” after having 4 martinis on a flight from San Francisco to L.A. The plot is gossamer-thin and there’s hardly a script to speak of.

The Bellas are back, and after seeing this travesty I wish they had stayed gone. There is almost nothing funny about this movie, and the musical numbers (which are the reason we go to see these films) almost universally fall flat. In fact, the only thing that “Pitch Perfect 3” is good at doing is making you question whether you really did like the first two movies, after all.