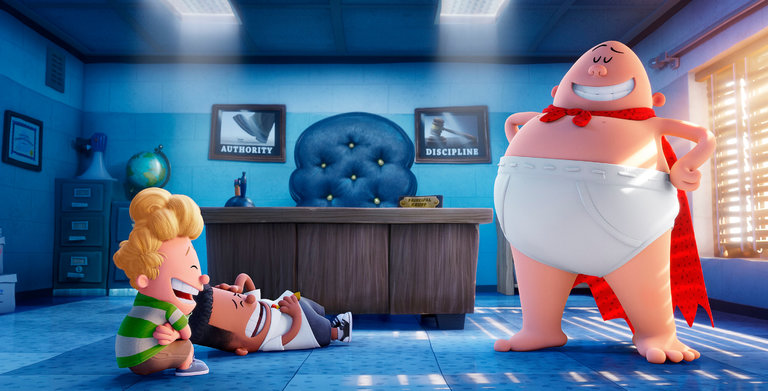 If “Captain Underpants” succeeds at one thing, it’s making me realize that I have the sense of humor of an eight year old. The movie, based on the incredibly popular series of children’s books by Dav Pilkey, relies predominantly on potty humor jokes as its core backbone of comedy — and it kept me laughing the entire way through. There aren’t any philosophical nor meaningful lessons to be learned here: it’s just mindless, poop-joke filled fun that celebrates the devotion and importance of a loyal friendship.

The movie tells the story of best friends George (Kevin Hart) and Harold (Thomas Middleditch) and their penchant for cooking up epic pranks that target their mean school principal Krupp (Ed Helms). One day George hypnotizes Krupp with a toy ring and with a snap of their fingers, he becomes the dimwitted (and overly enthusiastic) superhero Captain Underpants.

There’s something innately hilarious about the entire scenario, and the appealing, tidy animation lends the perfect punch to the plot. Watching the doofus Krupp strip down to his tighty whities and jump through windows while trying to save the day is even more enjoyable with the robust primary colors and curvy character styles that comprise the drawings. The animation is cheery, spirited and bright, and I really love how the entire film looks.

Hart, Middleditch, and Helms all give strong, cheery, and amusing vocal performances that perfectly fit their characters. Ditto for Nick Kroll hamming it up as Professor Pippy Pee-Pee Poopypants, the evil scientist with the most unfortunate of names. (Only the most stoic members of society who lack an ounce of a sense of humor won’t be able to resist chuckling at that)!

The story’s bread and butter is its mild rude humor, but at least it shows a deep appreciation (and a genuine celebration) of the fantastic comedy potential that lives in the most simple of fart jokes. The movie works because it doesn’t pretend to be something it’s not.

Yes, it’s goofy and juvenile, but “Captain Underpants” provides the perfect summer escape for the kiddos that will also entertain fun-loving adults. Now where did I put that whoopee cushion?