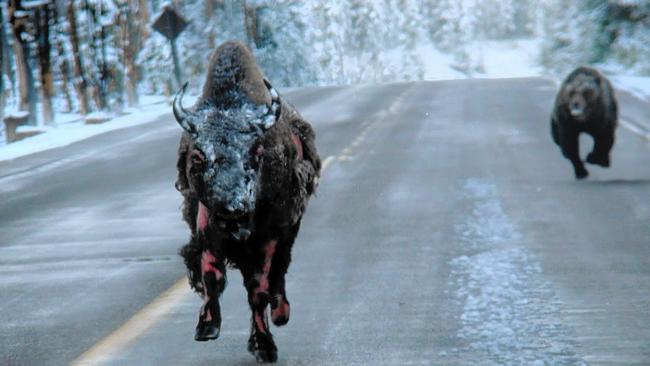 “Population Zero” is the very definition of subversive, clever filmmaking. Borrowing heavily from the found footage and true crime documentary styles that are so popular at the moment, the film uses its platform with considerable ingenuity — especially considering the subject matter. The line between fact and fiction is blurred to the point it’s barely recognizable: and viewers better be prepared to pay close attention to every little detail. Film literate viewers will likely see the movie’s major twist coming early on, but the majority of my film festival audience didn’t (which in itself made for a very fun q&a after the credits rolled).

The movie explores the terrifying idea and compelling scenario of a technically true loophole in the U.S. Constitution that was first proposed in a 2005 Georgetown Law Journal article by Brian Kalt, a Michigan State University professor and legal scholar. The loophole creates a potential “zone of death” in Yellowstone National Park, wording that could allow anyone to get away with a crime (including murder) in a certain area of the park. This film seeks to find the truth in the story of a triple homicide that occurred in this zone in 2009, a heinous crime where the killer willfully confessed to shooting three men in cold blood — and walked away a free man.

Real-life documentarian Julian Pinder leads the search for more answers, providing himself with an overly self-indulgent lead role (his screen presence is not at all commanding). He has an uncomfortable wooden delivery and persona, making it impossible to forget that he’s a filmmaker first and not much of an actor (the film is co-directed by Pinder and Adam Levins). The repetition throughout the film is more than a little tedious and quickly outstays its welcome, even in the film’s brief 84 minute run time. You’ll quickly get a sense of extreme déjà vu  that’s compounded by the constant images of rolling clouds, black and white photographs of the crime scene, video footage of the jailhouse confession, talking head interviews, and cheesy voiceover narration that continues to state the obvious as if the audience is dumber than a sack of hammers.

As more and more clues are slowly uncovered, the filmmaker eventually becomes the subject of the story. This is where the film rapidly devolves into a pseudo thriller as well as a preachy platform to convey an anti-fracking message (that manages to be both on point as well as pointless). As Pinder’s quest for the facts begins to expose more and more dark conspiracies and intrigue, the film dares (and at times straight up taunts) the audience to seek and find the truth in the story, leaving many to ask “is this real or not?”

Without giving away any spoilers, this low budget film takes a grand idea full of thoughtful complexity and executes it exceptionally well. “Population Zero” isn’t perfect but there’s much to admire in its ambitious spirit, and it’s certainly a shrewd, rebellious work of art.