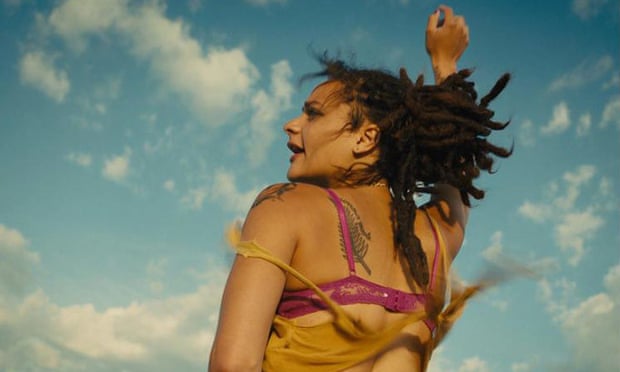 I have much respect for the intensely personal, visually stunning “American Honey,” the new avant-garde style film from director Andrea Arnold. How I wish it didn’t read as an overblown, self-indulgent disarray of semi-compelling ideas. This film is overly pretentious, rambling, and thinks it’s more important, and far better, than it actually is.

We first meet our heroine Star (Sasha Lane) dumpster diving with her two younger step-siblings. She’s living on scraps and in an (implied) sexually abusive home with her dad (mom’s out of the picture, dead from a meth overdose). Star spots a rag-tag group of wayward kids and decides to follow them into a local store, where she meets Jake (Shia LaBeouf), their handsome and charismatic leader and recruiter. Star sees him as sort of a savior, a way out of her desperate life and distressing situation. She ditches home to join the gang of kids on the road as they travel across the country selling overpriced magazine subscriptions.

Newcomer Lane is a standout in what’s undoubtedly a star making role; she plays Star with a delicate balance of toughness yet vulnerability and feels completely authentic throughout. The exceptionally talented LeBeouf turns in another credible performance as Jake, her temperamental and slightly ominous love interest. The supporting cast is convincing too, with Riley Keough all but stealing the show as the money-hungry, intimidating, salivating alpha boss Krystal.

Arnold films with a 4:3 square ratio, which feels less like a gimmick than a means of subversive artistic expression (Robbie Ryan‘s cinematography provides a gritty and gorgeous visual companion). The framing works because it gives a claustrophobic sense of enclosed spaces on the road trip with her makeshift family and mirrors Star’s view of her current life situation. Star only sees the limited vision that an 18 year old girl would see, as she tends to ignore the more perilous adult threats around her. Star is determined to come out on top, and it’s hard not to appreciate her savviness. I usually respond quite well to strong girl power stories like this, but I must admit that this is one of the only films where I didn’t want the girl to leave home — I wanted her to stay to look after her younger siblings instead of joining up with a sketchy crew of misfits.

There are plenty of cringe-worthy situations that only an adult with the hindsight of years of real life experience will understand. When Star carelessly hops into a car with three grown men and heads to their home for an afternoon of drinking and swimming, my pulse was racing with fear that the situation would end very badly. There are several situations in the film just like this one; whether they end in tragedy or not is a spoiler I won’t give away. It’s effective realism that flip-flops our perceptions of good and evil, and it’s incredibly well done.

The film has a definite mumblecore quality to it too, which helps lend authenticity to the story but also serves as a big distraction. The entire film feels like a Millennial’s iPad stuck on repeat. This film is so repetitive, beating the audience over the head — repeatedly — with its point. Over and over and over and over again. There are painful full length singalongs to popular songs; by the time the crew finally sings the titular tune by Lady Antebellum, the singalongs have been repeated so many times that it loses all impact. The soundtrack is killer, no doubt about it, but this constant repetition is irritating, annoying, and quickly becomes exasperating.

The film has layer upon layer of impressively textured visuals, a rich sense of place, and a true primal quality that vividly explores life as a disadvantaged teen runaway. It’s a restless, unrelenting glimpse of life in America from the point of view of those that society would rather choose to ignore. This film is so indulgent that it has a ridiculously long run time of nearly three hours, far too long to make a clear, concise point. It’s meandering and aimless, much like our teenage heroine.

I really wanted this to be a good film because I love and appreciate the idea and passion behind the project, but I simply wish it had been a little tighter. There’s still plenty to admire in “American Honey,” but it’s simply far too long and far too repetitive for me to heartily recommend.

“American Honey” is an ambitious and more than a little pretentious film about youth in America and what it means to become an adult when you are woefully unprepared to do so. More particularly, it is about growing up in a country of staggering wealth and equally staggering poverty when you are in the latter category. It’s about reaching the age of majority when your childhood was one of struggle and disadvantage, where precious few options are open to you as you make your way in a world that doesn’t care about you.

Although “American Honey” is a fictional narrative, it doesn’t feel that way. Director Andrea Arnold and her cinematographer Robbie Ryan frame the screen as though it was shot on 16 millimeter film. Arnold uses a group of actors that feel so startlingly authentic that (with the exceptions of Shia LaBeouf (Jake) and Riley Keough (Krystal) and a few others), they must have themselves been pulled from the streets. It has a very documentary-like aesthetic that works well for the subject matter, and although things do happen, there is only the faintest thread of a plot. The movie rambles, ebbs and flows while it follows this group of homeless kids as they go door-to-door selling magazine subscriptions for business owner Krystal.

This documentary style of filmmaking is both the strength and weakness of “American Honey.” Some of the scenes are well-constructed and heartbreakingly painful to witness, but others are overly self-indulgent and largely pointless. At a running time of two hours and 45 minutes, While Director Arnold is very much in touch with her subjects, she is in no hurry to get to her point, and by the time she finally does get there the movie has worn you down to the point of indifference. Which is really too bad because there is much to like about the movie; the film should have either been edited to about half of its current length or expanded and developed as a miniseries.

I can’t strongly recommend “American Honey” as a theatrical experience, but it may be better suited to home video, where you have the ability to pause it and come back later.