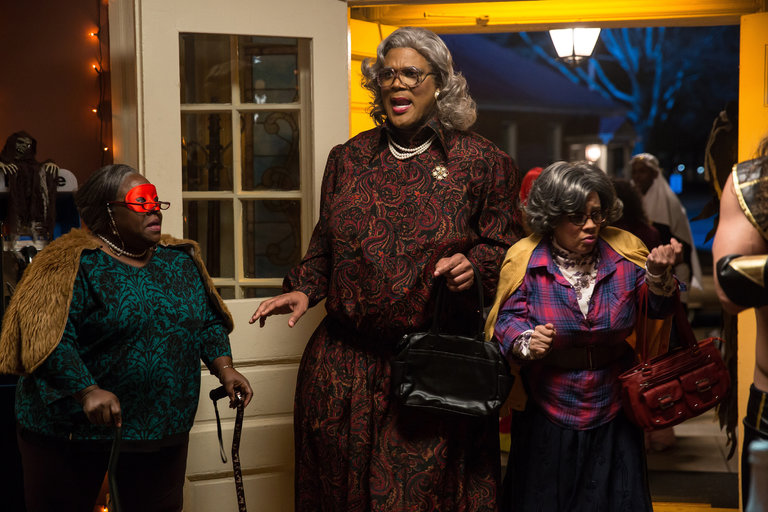 “Boo! A Madea Halloween” is the very first Madea movie I’ve ever seen and I won’t be upset if it’s also the last. This movie is severely lacking in humor, focused direction, competent acting, and most of all, subtlety. It’s almost as if the actors (screaming their lines and playing to the balcony) and the director (Tyler Perry, a man with a tremendously mundane directorial style) were in some sort of bizarre contest to see who could be the absolute worst at their jobs.

When pushover dad Brian (Tyler Perry) suspects that his defiant teenage daughter Tiffany (Diamond White) will attempt to sneak out of the house to attend a college frat Halloween party, he calls on his aunt Madea (also Perry) to babysit overnight and keep an eye on her. Madea shows up with her gray-haired entourage in tow, including the pot smoking Aunt Bam (Cassi Davis), Brian’s dad Joe (Perry again), and the really weird Hattie (Patrice Lovely). Tiffany of course slips down the back staircase and heads to the party. Madea inevitably crashes the event looking for her and calls the cops to shut the place down. Angry and seeking revenge, the fraternity brothers plot their revenge by trying to scare all the oldsters.

This movie portrays the elderly as being really, really gullible and really, really stupid. They act like complete morons when they think they’ve seen a g-g-g-ghost, hooting and hollering and falling down stairs. They are fooled by flickering lights, malfunctioning television remotes, fake zombies and evil looking clown masks. It’s a stupid idea filled with lame gags and dumb jokes. Worst of all, there’s zero suspense because the movie has already spoiled the surprise — that this is all part of a fake haunting.

Madea is mildly funny but mostly one-note; there’s just not much to this over the top character. Yes, she looks funny and she talks funny, and she has a no-nonsense demeanor with a violent streak, but this shtick is best suited for a short skit and not a feature length movie. “Boo!” feels like a one-note television sketch that runs on and on and on and never really goes anywhere. This isn’t perceptive nor inspired comedy; it’s lazy, self-referential, and tired. The story could’ve been scripted by a 5 year old. Get ready to watch the same jokes stretched out, repeatedly recycled, and overplayed to the point that they shrivel up and die a quick death in this poorly written ‘comedy.’

I chuckled at only a few jokes while the rest of my audience laughed indiscriminately at every pathetic punchline or lame attempt at physical humor. When I did laugh, it was mostly in relation to Aunt Bam and her pride about scoring a medical marijuana card. She’s by far the most amusing character in this movie, and that’s not saying much. I saw absolutely nothing funny about Miss Hattie, a ridiculous, stereotypical character with the most irritating voice I have ever heard. The most odious of the characters was Joe, a complete jackass of a man who drops the “n” word at will and makes despicable references about how he enjoyed beating his kids until they ended up on life support. Call me crazy, but I don’t find jokes about child abuse funny. Not. At. All.

There’s also a painfully drawn out bit where Madea and Aunt Bam poke fun of a chubby kid who is trick-or-treating with his mom. “You need to take your kid trick-or-treating for a treadmill and not candy,” Madea cracks. I find zero humor in the mean-spirited bullying of an overweight child. Is this what passes for comedy nowadays?