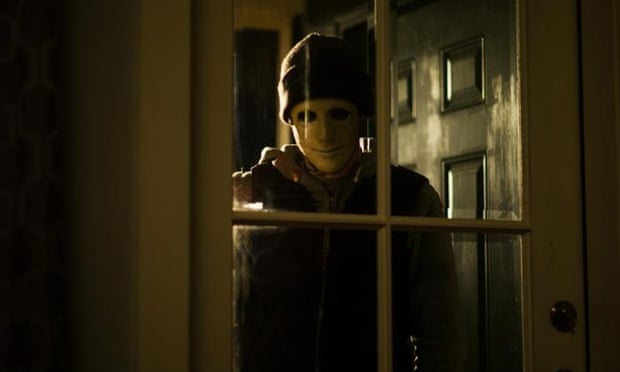 Maddie (Kate Siegel) is a writer who lives in a cabin in the woods. Having recently broken up with a longtime boyfriend, Maddie seeks the peace and solitude offered by the cabin. But it is this isolation that has made Maddie a target of a man in a mask (John Gallagher Jr.), who has come to kill her. The man takes his time toying with Maddie and stalking her, playing on her fears. The man takes his time in prolonging her fear of being stalked, taking full advantage of Maddie’s disability: as the man knows, Maddie is deaf.

“Hush” is a well-constructed slasher film of the home invasion variety. Writer / director Mike Flanagan (“Oculus”, “Absentia”) and his co-writer Siegel feed our universal fear of being attacked in our homes. As the classic final girl, Maddie is forced to use her wits to out-think the man, playing out each possible scenario and its flaws in her mind before choosing one. She makes bad and good ones, all the while frustrating the audience and forcing us to evaluate each of the options: if we were in Maddie’s shoes, what would we do?

The film is paced well, never outstaying its welcome. Unlike other recent films in the genre, it doesn’t heavily rely on jump scares, instead using light and darkness, and an economy of horrifying acts and gore, to its advantage. This movie has a remarkable sense of place, using the layout of Maddie’s home and its geography to maximum effect. The suspense and terror is organic and realistic, and the score is understated but effective.

If you’re looking for a good scare this October from a movie you can watch instantly on Netflix, right now, “Hush” is an excellent option.