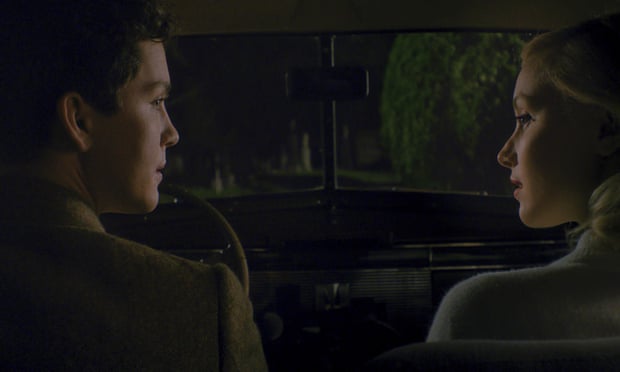 Studious Jewish boy Marcus (the fantastically talented Logan Lerman) longs to flee his working class New Jersey home — and avoid the Korean war — by enrolling in college in Ohio. Dad Max (Danny Burstein) is a butcher and mom Esther (Linda Emond) runs the household. Marcus’ parents struggle with him leaving the nest (and possibly his Jewish cultural identity), especially his father. As expected, Marcus thrives in the university environment as far as classes go, but he encounters some big problems with the school’s religious policies. Marcus soon becomes infatuated with the lovely and polished (and seriously damaged) classmate Olivia (Sarah Gadon), a disturbed young woman who has spent time in a mental institution for alcohol addiction and a suicide attempt.

There are numerous deep themes that are explored here, and it’s truly a film based on sophisticated ideas not mindless drivel. Instead of big CGI monsters or over the top explosions, we get a wordy, talky, think piece that riffs on love, death and bad decisions, an exploration of how every step we take propels our lives into a certain trajectory that may or may not be filled with happiness, tragedy or pain.

“Indignation” is a thinking person’s movie. Many of the glimpses we get into the lives of these characters are nothing more than mere flashes that only scratch the surface of their wounded psyches. (As with most literary adaptations, there’s a lot of information presented and the film at times feels crowded). Marcus’ mother longs to divorce her mentally abusive husband who is slowly losing his mind, Marcus’ roommates Flusser (Ben Rosenfield) and Foxman (Philip Ettinger) each have some unspoken societal struggles, and something is deeply troubling about Olivia’s relationship with her own father. Nothing is spelled out for viewers; those who pay attention will be rewarded. How refreshing it is to see a smart movie made for smart audiences.

My major criticism of the movie is that at times it feels a little too much like a stage play, which in turn makes it tedious in parts. At other times the stagy feel actually works to make the film better. Case in point: the most compelling portion of the film is a quietly ferocious extended scene of Marcus and Dean Caudwell (Tracy Letts) going head to head in a believer vs. atheist intellectual power struggle. This is the most intense part of the movie and it’s also the best. I was completely and utterly engrossed and found myself sitting forward in my seat.

Moviegoers need to encourage Hollywood to make more movies like this one, so please vote with your wallet and go see it. Your brain will thank you.

In the 1990s, there was a trend in movies and television that featured would-be philosophers with an expansive vocabulary who practiced the art of verbal sparring. At the time, I found the trend annoying. Particularly vexing was the fad of precocious children and teens who apparently saw themselves as the reincarnation of Immanuel Kant and used a lexicon that was completely inauthentic to the time and the person. Examples were everywhere, from movies like “Reality Bites” and “Clerks” to television shows like “Dawson’s Creek” and, at times, even “Beavis and Butthead.”

At some point after the close of the millennium, there was a noticeable shift in pop culture away from these amateur Aristotles and towards our society’s apparently endless fascination with watching celebrities, competition shows, and disastrous personalities destroy themselves in front of our eyes. Our societal journey towards the future predicted by “Idiocracy” has sped up to a breakneck pace, and if the success of the Trump campaign is any indication, the brake lines have been severed. In the midst of this, I’ve actually found myself nostalgic for the movies of the 90s.

To keep the analogy going, “Indignation” is like an emergency off-ramp on the highway to cultural idiocy. It’s about a teenager from New Jersey who leaves home for a small college in Ohio. While he’s away at school, young Marcus (Logan Lerman) finds himself in the midst of a series of new trials that have nothing to do with his academics: his roommates are loud, insensitive guys who don’t really care about Marcus but have no respect for his privacy; the Dean of Students (Tracy Letts) won’t respect Marcus’s wish to focus on his studies to the exclusion of a social life; an avowed atheist and cultural Jew, he is nevertheless required to attend Catholic services at the school once a week; and the girl he is dating (Sarah Gadon) is moving too fast for his comfort.

The story is familiar to anyone who traveled far away from home to start their life as an adult. While we may not all be cut from the same cloth as Marcus, he’s a sympathetic character who it’s impossible not to respect. He is highly intelligent and respects logic above all, and it’s when those around him don’t share his worldview that things become difficult. Marcus may not have his peers figured out, but he knows exactly who he is. So when Dean Caudwell begins challenging Marcus and his values, they lead to some epic verbal battles where the two butt heads.

And it’s in these verbal sparring matches that “Indignation” really shines. The two scenes featuring Caudwell and Marcus are easily two of the best scenes on film this year. These encounters are much more exciting than any scene from any action movie of 2016; I was much more invested in these confrontations than any civil war between Iron Man and Captain America. Why have we (apparently) collectively forgotten the thrill of a good debate? Why don’t we value the matching of wits over physical strength and athletic prowess? When did the rivalry of Holmes and Moriarty become less interesting to us than Jason Bourne versus some secret agent guy?

I loved “Indignation” for what it is, and what it’s not. It’s a potent reminder of how we can be entertained without explosions or superpowers.