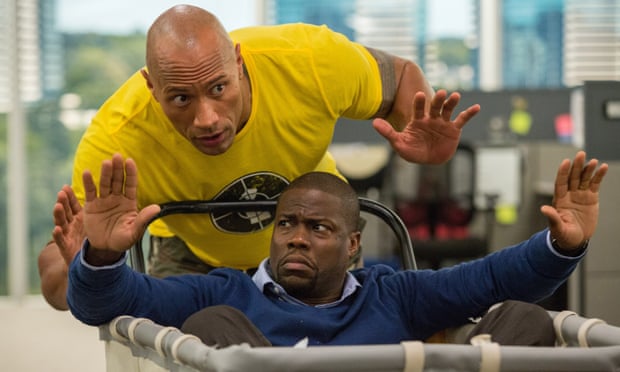 Dwayne Johnson and Kevin Hart are two of the most likeable people on the planet. I struggle to think of one person who doesn’t love either one or both of these men. Their charisma is one of the only things that works in “Central Intelligence,” the latest half-baked buddy comedy / action movie that Hollywood has churned out.

Johnson plays Bob, a former fat nerd who has since “worked out 6 hours a day, every day, for the last 20 years” and is seriously buff. When Bob travels back to town for his high school reunion, he looks up Calvin the “Golden Jet” (Hart), a popular jock who was always kind back in the day.

You can probably guess where this film is going — Calvin gets tied up in Bob’s CIA troubles, there’s some double crossing, lots of confusion, good guys are bad, bad guys good, yadda yadda yadda. The simple plot is pretty weak; I really wish these two guys had a better movie to work with. The movie is predictable, dumb and the laughs are scarce, but the two leads have a strong appeal that makes it impossible to totally hate this movie.

While the film simply sails along without much going on, there are still two things to like about it (other than the two leads). First, there’s a very strong and positive anti-bullying message at the core of the story. The movie teaches that it’s always right to do the kind thing, and I don’t think anyone can argue with that. Second, I thoroughly enjoyed some of the inspired surprise acting cameos.

There’s simply not enough that works to recommend the movie, but at least it’s good natured and has a heart of gold.

Seriously, who doesn’t like these guys? It was no surprise to me that the movie did huge business on Father’s Day: having gone to the movies that day, we saw packed theater after packed theater of dads out with their families, all of them seeing “Central Intelligence.”

So does it live up to expectations? Sort of. Both are likeable as always, and Johnson gets to do a bit of comedy – which has always been one of his strengths – and Kevin Hart does a good job playing off of him. I had some good laughs early on, but those started to gradually taper off towards the middle, virtually disappearing by the movie’s end. As a comedy, it’s a bit of a wash. No worse than your average Hollywood big summer action-comedy, but not much better, either.

Apart from the laughs, the story is just interesting enough to hold your attention, but it’s no “Pulp Fiction,” either. When the guys start to unravel the clues to figure out who is behind the attempted frame-up of Johnson’s characters, things get increasingly ridiculous and start to try your patience. Fortunately, it’s short enough that it never becomes completely boring.