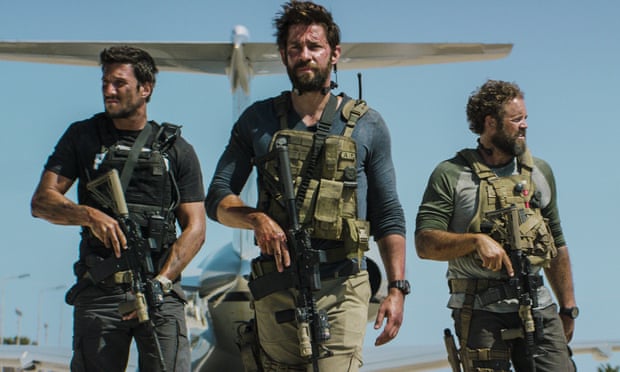 In what could have been a sophisticated war movie, an examination of foreign policy ideas, a serious analysis of the nature of the conflict, or a poignant memorial honoring America’s servicemen and women, “13 Hours: The Secret Soldiers of Benghazi” instead chooses to take the low road.

This big, loud, overly long movie about the 2012 attacks on a U.S. diplomatic compound in Benghazi, Libya feels like it’s doing nothing more than preaching to the Fox News choir. Instead of honoring the fallen Americans, this movie did more to dishonor them. There’s no exploration of the “why” of the conflict, there’s only a simplistic dividing line of “bad guys” and “good guys.” All of director Michael Bay‘s signature shots are here: the point-of-view from a bomb sailing through the air, bullets and blood splattered about, and lots and lots (and lots) of big, fiery ‘splosions.

Get ready for an endless parade of movie cliches, from the final phone call to the wife and kids (where one blurts out that she’s pregnant), teary-eyed soldiers and of course the American flag shot full of bullet holes. U.S.A.! U.S.A.! U.S.A.!

Most offensive was the presentation of our testosterone loaded, bearded heroes, military elite with big muscles and even bigger guns. Of course they can’t do their jobs to the fullest because these darn Ivy League educated, clumsy CIA agents keep getting in the way! Boo for higher education and fancy book learnin’! Yay for physical fitness and blowing shit up! I have no disrespect for our military but come on, this was just a ridiculous plot point. I’m also not saying that elite military soldiers aren’t whip smart and highly educated — but this movie seemed to take the opposing position and it irked me.

The unnecessary, gimmicky hand held camera work made me super queasy and detracted from the story, but the extended action sequences and shootouts were done well, and there’s a fine roster of actors at work including John Krasinski (Jack), David Costabile (Chief), Pablo Schreiber (Tanto), James Badge Dale (Rone), and David Denman (Boon). As a result, “13 Hours: The Secret Soldiers of Benghazi” works solely as a mindless action movie. The movie is mildly entertaining but it’s a shame that more wasn’t done with the story.

I used to be a Michael Bay defender. Not based on the “Transformers” movies, mind you (those are almost universally terrible) but based on the rest of his body of work. “The Rock” and “Armageddon” are damned good movies, and “Bad Boys II” is one of the best action movies released in the last 20 years. “Pain and Gain” made my Honorable Mention list in 2013. Hell, I was even one of the few people who liked “The Island.”

Based on those selections from his filmography, I viewed Michael Bay as one of the best action movie directors. His action sequences are larger than life. His jingoistic, pro-military view can be appealing. Even his trademark lens flares and dramatic upward angles are effective at raising stakes and giving his heroes an almost-mythic quality. What he does, he used to do very well.

Given this background, I had high hopes for “13 Hours: The Secret Soldiers of Benghazi.” I want to be able to think of the “Transformers” movies as craptacular diversions for Bay; exceptions to the overall rule of workmanlike and solid direction that I thought informed most of his other efforts. I’m sorry to say that if “13 Hours” is any indication, I think Bay has lost what talent he once had for making these types of movies.

The first hour of “13 Hours” serves to set up the second, where we see the titular soldiers defend a secret CIA compound from a siege by largely unidentified militants. I think I’m a pretty intelligent film-goer, but I had an extremely difficult time following what was happening during the first half. The scenes changed from the CIA compound to the nearby official diplomatic one, but they shifted so quickly that it was hard for me to tell what was happening, where.

Worse yet, “13 Hours” takes shaky-cam quick cutting to a whole new level. Not only did the camera’s constant movement induce nausea, but it also made it nearly impossible to tell who was shooting at who, and when. I get it — part of the point of the movie is that when the combatants aren’t wearing uniforms, it’s difficult to tell who is on your side. But that point was much more effectively made in the second half, when we could finally tell (for the most part) what was happening, where. There are plenty of Baysplosions here, but Baysplosions only work when I can tell what it is that’s exploding.

Bay used to be one of our best action filmmakers. Now he only serves to punctuate how terrible most American-made action movies have become. I’ve said it before and I’ll say it again: Paul Greengrass / “Bourne” shaky cam shots with fast cutting don’t make fight scenes more exciting, they make those scenes more confusing. They are the tool of the lazy and untalented filmmaker. Anyone can jostle a camera around and create quick cuts; actually choreographing fight scenes so that the audience always knows who is hitting or shooting at whom, and where they are standing in relation to one another or their surroundings takes actual talent and skill.