I was about to give up on 2013 until “American Hustle” came to the rescue. Finally, a film that made me break into applause as soon as the end credits rolled! THIS is how it’s done.

Everyone loves a good scandal, and this movie is loosely based on the true story of the ABSCAM takedown, making it all the more amazing.

Director David O. Russell is the master at extracting insanely incredible performances from his actors. Jennifer Lawrence KILLS IT as the trophy wife of a con man (I could watch her “Live And Let Die” lip synching while cleaning scene over and over and never tire of it), while Amy Adams and Bradley Cooper have an undeniably electric chemistry that nearly melted the movie screen. This isn’t meant to diminish Christian Bale or Jeremy Renner either, all of whom are at the very tip top of their game. The performances are all so incredible that I think the entire cast should be given Oscars this year.

Aside from the stellar performances, this is one smart movie. Loaded with cool period costumes, whip-smart dialogue and a phenomenal soundtrack that rivals any that Tarantino has ever chosen, “American Hustle” blows the other films of 2013 right out of the water. This is going to be the film I’m rooting for this awards season. It’s a wild ride.

Mention Jesse and Celine and my fellow film-literate Gen Xers will know who you’re talking about. “Before Midnight” is the third installment in their relationship saga (“Before Sunrise” and “Before Sunset” being the first two in the trilogy) and is a must-see if you are a fan of the earlier films.

It’s been a wild ride to see how this relationship has evolved over 20 years. The characters have grown up and grown old with us, first meeting in their twenties on that European train in 1995, suffering through separation, loss and divorce, and now back together with twin girls on a summer vacation. I loved being able to check in on this couple to see how they are dealing with the joys and trials of a relationship that’s spanned nearly two decades.

“Before Midnight” is loosely scripted and filled with lots of improvisation, something that works on a remarkably sophisticated level since the two leads, Ethan Hawke and Julie Delphy, embody their characters inside and out. These two have BECOME their characters over the years. You can feel their chemistry, almost to the point where it feels like you’re watching a documentary of your best friends and their deteriorating relationship.

This movie is so real it hurts. The entire second hour is pretty much an ongoing verbal fight in a hotel room in Greece but it’s so wonderfully done that after the knife has been twisted in your gut, you ultimately feel a combined (and conflicting) sense of relief, hope and foreboding when the film ends. Without question one of the best films of 2013.

Out of all of the films on my list, “Spring Breakers” is the one I’ve found myself having to loudly defend all year long. You either love it or loathe it, and I love it. Dig deeper and look past the copious amounts of drug use, nudity, sex, profanity and violence and you’ll find a biting critique and unflinching peek at the duality of modern teen pop culture (the YouTube generation).

The unsettling subject matter here is very dark and disturbing and is made to make you “feel” and “experience” the overall tone. “Spring Breakers” pulsates with a nightmarish kinetic energy that is reflected with its contrasting dreamlike bright neon pinks and greens; this movie LOOKS great in its subversive style and cinematography. Just as in the story, everything looks beautiful from a distance — it’s when you take a step closer that you see the raw ugliness of the characters and their horrific actions.

There are some fantastically choreographed scenes here, most notably the robbery at the Chicken Shack and a surreal, hypnotic sequence of the girls in pink ski masks singing Britney Spears’ “Everytime” around a white piano. James Franco’s “look at my shit” monologue instantly made my list of one of my favorite scenes in the history of cinema — it’s a thing of sheer amoral poetry, and one that perfectly sums up the blurred messages of beauty, sex and violence that bombard us daily.

WARNING: This film is not for everyone. Most of the lead characters here are true sociopaths, lacking any sort of moral compass. The filmmaking has deeply grounded Indie roots, so expect soft voice-overs, blurred point of view reflective shots and subversive slow motion camerawork. This movie is made to make you feel uncomfortable and the tone gives you an overwhelming sense of dread. The moral decay on display here will have you longing for a shower afterward, and the film’s exploration of the shallow, superficial world of four empowered young women will leave you with a fascinating, original commentary on modern society.

This entry on my Top 10 list took the longest to write. I hope I’ve conveyed how much I love this film and how important I think it is.

I’ve been promoting this film since I saw it at the 2013 Sundance Film Festival last January so most of you know how I feel about this little gem of a movie. The premise is simple: fed up with their parents’ rules, three teenage friends decide to run away from home, build a custom house out of found items and scrap lumber, and live in the woods all summer long. The movie celebrates the strong bonds of family, friendship and loyalty with a truth that will undoubtedly strike a nerve in your inner child. This pitch-perfect coming of age tale takes you back to that summer when you were 14 years old and longed for the freedom (and were blissfully unaware of the disappointments) that adulthood ultimately brings. It’s a very funny film and is very touching too, and is one I offered my “famous” money back guarantee on — see it and if you don’t like it, I’ll pay you back for the price of your ticket or rental fee.

“Nebraska” is perfect in its simplicity: this is a clearly crafted film with an extremely well-told story about family, life and self discovery. This bittersweet road trip movie is appropriately filmed in black and white, giving it a timeless look and feel. The actors are in top form here, perfectly playing off each other and rattling off the witty dialogue with a natural ease. Will Forte is perfect as a loser son, Bob Odenkirk is great as his older brother, and Bruce Dern is fantastic as their father Woody, a cantakerous old bastard who is convinced he’s holding the winning ticket in a million dollar magazine sweepstakes. After hitting the road to Nebraska in an attempt to claim the prize money, the pair end up at at pit stop at Woody’s childhood home. There are some great scenes that take place here, ones that resonate with a truthfulness that’ll make you laugh (albeit uncomfortably). Since I grew up in a very small rural town, a lot of the characters and situations in this film felt so real that they could’ve happened right there on Main Street. The final shot of the movie is so perfect that it had me ready to cheer. This is one great film. 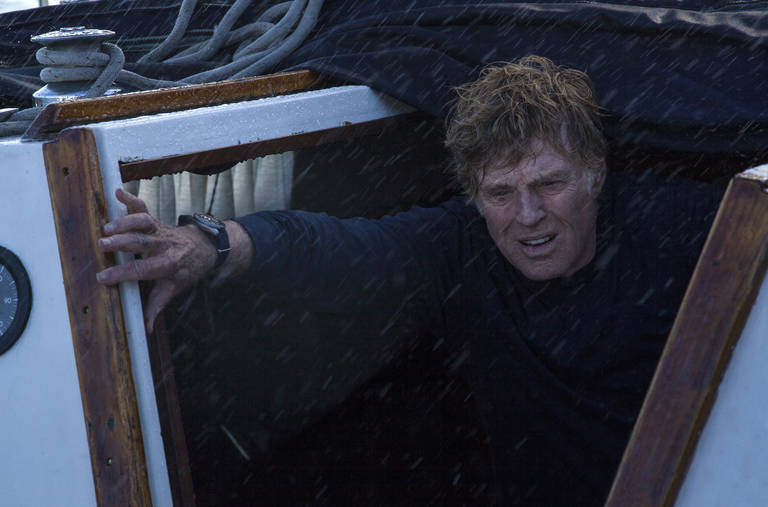 This movie is what “Gravity” wanted to be (and failed). There’s about two sentences of dialogue spoken in “All Is Lost” and there’s only one actor onscreen (the great Robert Redford) for the entire 2 hours, but it’s one of those rare films that rewards the moviegoer with repeat viewings. There are so many details presented that you’ll find yourself constantly speculating about every little thing: is that a wedding ring? Who wrote that letter? Who gave that gift? What is the character’s profession? How did he end up alone on a yacht? I RECOMMEND THIS FILM TO EDUCATED, INDEPENDENT THINKERS AND THOUGHTFUL VIEWERS ONLY because you are required to get involved in the story; you can’t simply shut off your brain and watch this movie. My mind was so engaged during this film that I was exhausted afterwards — but in a good way! Watch this with 10 of your friends and each one of you will have different interpretations of the character, his motivation, and what happens in the very ambiguous ending. The movie is packed action that is mostly internalized, and it’s impossible for me to forget the uncomfortably voyeuristic pain I had while watching a man face his mortality and rely on his wit, life experence and education in a struggle to survive at sea. I kept asking myself, “what would I do?” if I was alone on a slowly sinking boat with no help in sight. Scary, challenging and intensely personal, “All Is Lost” is a movie that I can’t shake.

One of the best sports movies I’ve ever seen, this movie is a high-energy (and often sexy) exploration of the true story of two rivals in the 1970s world of Formula One car racing. This movie deserved to have a bigger audience and I hope I can convince you to watch it. Even if you know nothing about Formula One race car drivers, you’ll dig the thrilling action, expertly choreographed stunt driving sequences, and the pure exhilaration of this skillfully filmed movie. There’s plenty for everyone to love in this film. “Rush” not only looks great but it SOUNDS great as well. If you didn’t catch it in the theaters, you really missed out. Watch it at home on the biggest screen you have with the volume cranked up.

This movie has a 19% fresh rating on Rotten Tomatoes so I am definitely in the minority on recommending this one, but the overall tone of this film won me over. It’s snarky, awkward, sarcastic and parts are bordering on ridiculous, but Matt Dillon steals the show and is hilarious as a “secret agent” boyfriend. The always delightful Kristen Wiig is the unstable, loveable (or is it loathable?) protagonist who is forced to take a good, long look in the mirror — and hates what she sees. What I truly loved about this film is that the characters aren’t quirky simply for the sake of being quirky — they are REAL people with REAL quirks. “Girl Most Likely” might be a bit too indie and unconventional for some, but if you are a fan of movies with loads of self-loathing (and lead characters that have been left wondering what “could have been” in life), you’ll dig this one. 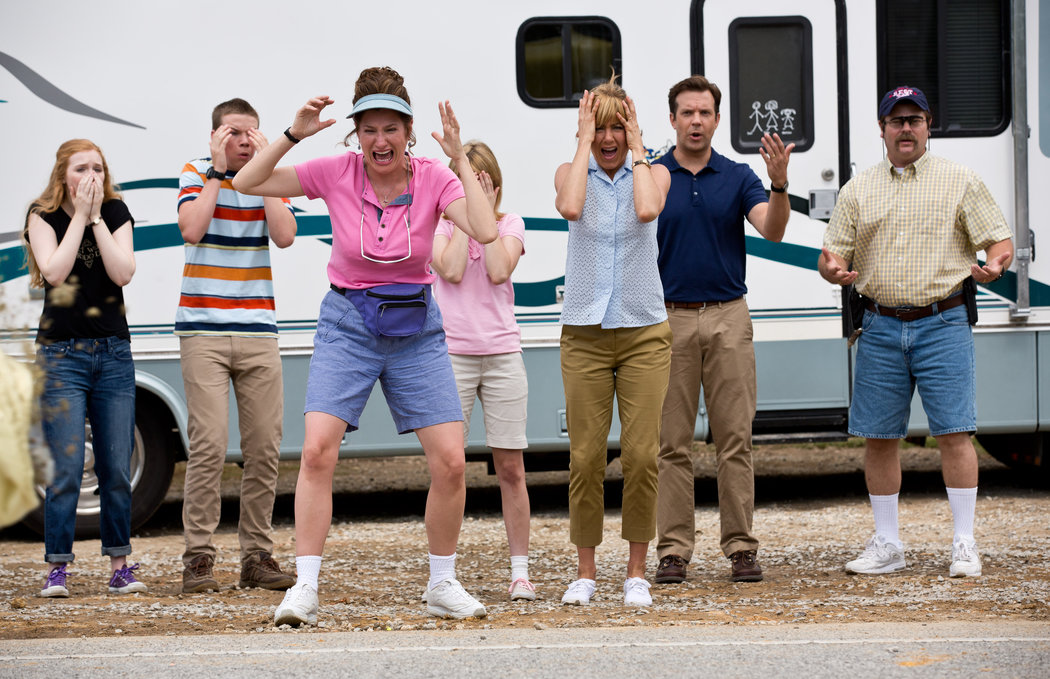 Yep, I’m as surprised as you are that this comedy made my top 10 list, but I give credit where credit is due. This was one of my favorites of 2013 because it is really, reallly, really funny! Hardly any jokes fall flat in this whimsical comedy — Jason Sudekis and Jennifer Aniston have some serious comedic chemistry (I hope they make many more movies together). This inventive story of a drug running road trip gone wrong is one of the edgiest, funniest comedies of the year. Striking the perfect balance between mean-spirited and kind-hearted humor, “We’re The Millers” is appropriately raunchy at just the right times while teetering on the edge of sentimental when needed. This is one funny movie.

This irresistible Australian movie tackles the true story of a female aboriginal singing quartet that heads to Vietnam to entertain the troops in 1968 (wait, wait: don’t stop reading; give this one a chance). While predictable and formulaic at times (the anti-racism message is particularly heavy-handed), the performances are genuine and the story has just the right amount of soul and sass. Chris O’Dowd gives one of my favorite performances of the year as Dave Lovelace, the Sapphires’ manager (who has no rhythm but a lot of soul). Sweet, thoroughly enjoyable and undeniably infectious, this one is a true crowd pleaser. I dare you watch this movie and not fall in love with it!