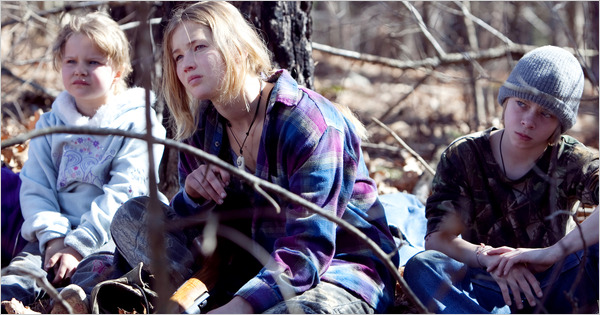 Rarely do I see a film that I think is nearly perfect, but “Winter’s Bone” fits the bill. It is one of the most skillfully directed movies I’ve ever seen — not an accolade I give out lightly. I saw this film in early January at the Sundance Film Festival and I have been steadfast in proclaiming it as the one to beat for the year’s best film. A basic story that’s as old as time is given a fresh new take by exploring the bleakness of a poor family in the Ozarks and a strong female character that must protect them. If you haven’t seen this movie yet, please rent it. I don’t want to say too much to avoid giving too much away, but this is a fantastic movie that will grab hold of you from the opening credits and won’t let go ’til the end. A truly poetic exploration of family, devotion, honor and survival. In short, simply fabulous in all respects.

I fell in love with this movie the minute I saw it. There’s really nothing NOT to like about it. This film gives you a non-gratuitous completely original, completely engaging and completely entertaining exploration of the stresses of marriage and the modern family. The characters in this movie are some of the best ever written and the acting is top-notch from all involved. There’s just something so warm and relatable and devastatingly authentic to the offbeat truths that are exposed in this fantastic relationship comedy-drama. This is a soulful, sharp, smart and witty film for thinking adults.

#3: How to Train Your Dragon

Thank you, Dreamworks for making a thoughtful and beautifully animated movie! How on earth can the same studio that released this gem also bring us one of the worst animated films of the year (“Shrek Forever After”)? ‘Dragon’ is one of those rare films that just takes your breath away the first time you see it. The animation is absolutely gorgeous and the heartwarming themes and characters are so authentic and lovable. The soaring flying scenes are top notch, and the message of treating animals with kindness and respect is something that we should all applaud. This movie, quite simply, kicked Pixar’s butt this year. You won’t see “Toy Story 3” on my 10 best list.

Talk about a film that really hits a nerve! “The Freebie” is one of those raw, unflinching looks at a modern relationship that is so well done, you can feel yourself and the others around you squirming in their seats. Harsh but emotionally truthful, this low-budget movie has stuck with me more than anything else I’ve seen this year. The premise is simple: a young couple decides to give each other a ‘night off’ so they can sleep with whomever they choose with no questions asked. Sounds simple, right? Not a chance! If you are a fan of independent film, make sure you check this one out. An honest, albeit uncomfortable, look at contemporary relationships.

I think this may be the most over-hyped film of the year, but I can’t deny that it was really, really good. A very compelling and convoluted subject was translated to the screen in a clear, concise and uncomplicated way. And this may make me sound like a film snob, but the cinematography was so lovely; the one scene I still can’t get out of my head is the dimly-lit, snowy alley scene (if you’ve seen the movie you know which one I’m talking about). Top all of that off with fine performances all around and the timeliness of the story, and you’ve got a solid movie that gives us a timely reflection of the birth of the online social scene.

This isn’t the perfect movie through and through but it greatly benefits from the casting of the gifted Jeremy Renner. It has plenty of faults, most notably the tacked-on weepy Lifetime movie ending and the ridiculous shootout at Fenway Park (sounds exciting but it’s not). But there is enough to like about it that it has made my top 10 list this year. A smart and engaging crime drama that still delivers conventional thrills, this movie, for me, cements the talents of Ben Affleck as a pretty damn good film director.

For the life of me, I can’t figure out why this fantastic Paul Haggis directed movie was ignored. Russell Crowe is absolutely fantastic and really carries the film — something not many actors would be able to do. He is fierce yet affectionate all at once, and does a great job conveying a sense of urgency, desperation and sheer determination to right the unjust imprisonment of his wife. This movie is fast paced, exciting, well written and extremely touching. There’s a scene in which Crowe’s character silently says goodbye to his mom and dad that is my pick for the best scene in any movie this year. If you are lucky enough to still catch it in the theater, I can’t recommend it highly enough.

I am not a fan of westerns and I have to admit that I dreaded seeing this movie. But wow, I really loved it! The costumes are nothing short of fantastic and the acting, which could’ve been overshadowed by the sheer vastness of the film, was spot on. The Coen brother’s direction, it goes without saying, was fabulous as well. Again this isn’t the perfect movie — it really falls apart about 2/3 of the way through — but the first half is engaging and worthy of a Top 10 spot. A beautifully shot and incredibly well acted film.

A perfect movie it’s not, but this charmingly messy little indie was one of my favorites of the year. Real, sympathetic characters saying the things you sort of wish you could say but never do while exploring all of our naive approaches to the world around us. I love little movies like this that come along and sort of smack your expectations in the face, and one that really gives its audience the freedom to draw from their own life experiences and come to their own conclusions about the motivations of characters and the different paths we all choose in our everyday lives.

This movie was panned by critics and audiences alike but I think it was one of the most invigorating concepts I’ve ever seen. The reason it earns a spot on my Top 10 this year is that any movie that only has one set location (a small wooden coffin) and can keep me entertained by giving me a wild ride across many conventional genres (romance, thriller, action, drama) is a huge success. The film is shot with the perfect claustrophobic look and feel and is a real thrill ride. It’s just 90 minutes of Ryan Reynolds in a coffin, but this is one of the best thrillers this year.