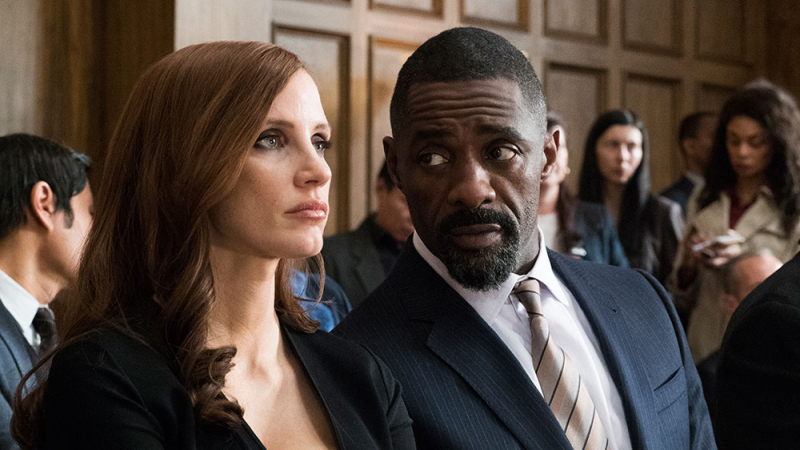 Aaron Sorkin has built a career writing intense, dialogue-heavy screenplays for both the big (“The Social Network” “Charlie Wilson’s War”) and small (“The West Wing,” “The Newsroom”) screens, and “Molly’s Game” marks his motion picture directorial debut. The film is based on the true story of Molly Bloom (Jessica Chastain), a world-class skier who ran the world’s most exclusive high stakes poker game for over a decade before being arrested by the FBI. Known as the “Poker Princess,” Bloom hosted players from the Hollywood movie industry, business heirs, major sports stars, and eventually even the Russian mob. It’s a fascinating story that unfortunately has been turned into a monotonous and overly long film.

Sorkin’s direction is flat and bland, which makes the movie feel more like a mediocre television show than a true cinematic experience. His rhythmic script is full of brisk one-liners that Chastain delivers with a swiftly furious, no-nonsense intensity that becomes aggravating before the film’s second act. As a filmmaker Sorkin is lazy, relying heavily on the unnecessary overuse of voiceover as a narrative device. Even the lead actress seems disinterested from the start, opening the film with an uninspired delivery of explanatory narration. The true story may be fascinating, but the film breaks underneath the weight of its voiceover crutch and general unpleasantness of its lead actress.

Chastain is miscast yet again, a talented actor who just can’t seem to find her footing or her onscreen persona. Idris Elba walks through the motions in his supporting role as Molly’s lawyer Charlie Jaffey, and the pair have zero chemistry (their scenes together feel so forced and uneasily orchestrated). Both actors struggle to deliver some of the dialogue, resulting in a film that has the stiffness of a high school stage play. It doesn’t help that this modern day crime drama seems to be written as if it was being told through the eyes of a tabloid gossip columnist.

Bloom is an eager and hungry entrepreneur who is held up to be an unlikely and rebellious folk hero, a business savvy opportunist with a greedy streak. It’s great to see a strong female who makes her own success in the business world, but you can’t ignore the fact that Molly operates in an underground gray area of legality. As a result, the whole female empowerment message subsequently gets lost in this clunky film. The story may be well told, but in the most irritating fashion.