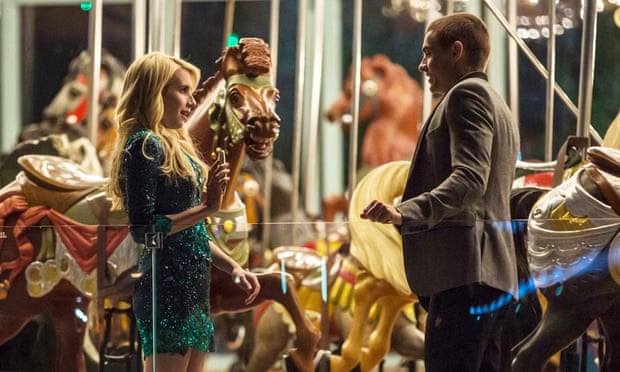 The fast paced teen thriller “Nerve” sets out to present a modern criticism of social media and it succeeds: sort of. The film tackles the glamour and appeal of internet obsessed Millennials who all want to have the most followers and become insta-famous. The social commentary is ultimately unsatisfying but the film’s cutting edge cinematography and overall style is a winner.

Based on the 2012 techno-suspense novel of the same name by Jeanne Ryan, this frenzied, fast paced film is a little far fetched but at least it’s interesting. High school senior Venus (Emma Roberts) is a goody-goody student with a fairly boring life. When her wild child best friend Sydney (Emily Meade) pokes fun of her dullness, Venus decides to become a player in a very popular black market internet game called Nerve. She must complete a series of adrenaline junkie dares to earn money and ultimately win the game. When the anonymous watchers decide to pair her up with fellow player Ian (Dave Franco), a strange romance blossoms. It doesn’t take long before the game takes a sinister turn, with the risky dares getting more and more dangerous as the night goes on.

This isn’t a sophisticated story, it’s riddled with numerous plot holes, and there’s an unexpected lack of chemistry between the always delightful Roberts and Franco, but the film is exciting and engrossing enough that I was able to overlook its flaws (okay, except for the ridiculously silly ending). It’s visually unique and artistically refreshing, and it reminds me of the way I felt after I first saw “Spring Breakers” by Harmony Korine (another movie that reads like a time capsule for the Instagram age that clocked in at #3 on my Best Movies of 2013 list).

The subject matter is a bit dark but the film is pulsating with vibrant, intoxicating energy from start to finish.

“Nerve” is a cool idea in search of a better story. The demand for movies based on well-known young adult (YA) novels, once a hot commodity in Hollywood, is clearly cooling off and “Nerve” feels like a half-assed attempt to tap into what was once a powerful market segment in teens.

The idea is simple enough. “Nerve” is an Internet game where players are paid to take dares suggested by an online community of watchers, who pay for the opportunity to watch. Vee (Emma Roberts) is a bookish intelligent high school senior who has never taken a risk in her life. Her best friend Sydney (Emily Meade) is (of course) the exact opposite. After being goaded by Sydney about her play-it-safe lifestyle one too many times, Vee signs up for “Nerve” as a player. The dares start out innocent enough, and through her first dare she meets fellow player Ian (Dave Franco). The two team up together for a series of dares that become increasingly risky (and profitable), until the stakes are raised to the point where players’ lives are at risk.

This movie lives on the chemistry of Roberts and Franco. It’s impossible not to like them, and as a result you’re rooting for them even as the plot becomes more and more ridiculous and logic becomes tortured in the aim to continue raising the stakes. But then at some point, it becomes a little too farfetched and impossible to suspend disbelief. By the time we get to the climax, the plot holes have become too glaring and the film has become too unbelievable for it to work. At the end, I had mentally checked out and it was simply too late to rehabilitate the characters or my interest.

Still, the movie wasn’t without its fun moments so it’s not a total stinker. It’s worth checking out if the concept or actors interest you. Otherwise, skip it.